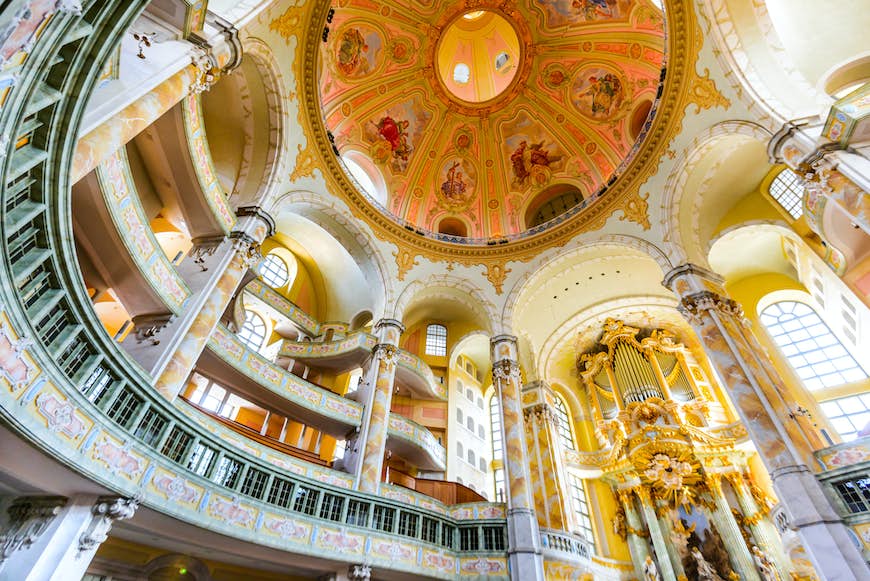 Dresden is a city for time travellers. You can spend a day jumping between beautiful Baroque buildings while walking in the footsteps of more recent ghosts that continue to weigh heavily on the soul of the city.

There’s the resplendent Altstadt (Old Town) meticulously rebuilt to its former glory and the Christmas markets that light up an otherwise bleak time of year. Across the Elbe, you’ll find modern Germany with its craft beer, international cuisine and immersive street art. Then, a short train ride away, sip award-winning wines or head out into the countryside to take in some of the most awe-inspiring natural views.

Here are the best things to do in Dresden.

Get trusted advice on the world’s most mind-blowing experiences delivered to your inbox every week with our email newsletter.

1. Climb to the top of Frauenkirche for a panoramic view of the old town

Churches in old European towns usually cost a penny by the dozen. But the Frauenkirche (Church of Our Lady) in Dresden stands out for its history and symbolism.

The 18th century Lutheran church – along with almost all of Dresden – was destroyed in the firebombing of 1945. Post-war leaders initially left the church in ruins as a sort of war memorial until the late 1980s when plans for reconstruction began. Using 8,000 salvaged stones, the Baroque masterpiece was officially brought back to life in 2005. The golden cross at the top of the dome was built by the son of a British pilot who participated in the bombardment of Dresden, as a sign of reconciliation.

Planning tip: The viewing platform with spectacular views of the surroundings of Neumark is open to visitors all year round. Find the latest information on opening hours and admission price online.

Kurt Vonnegut is known as one of the most profound and prolific writers in American history. But before making a name for himself as a writer, he dropped out of Cornell University and enlisted in the US Army to fight in World War II. Captured during the Battle of the Bulge, he was interned in Dresden during the devastating and controversial bombardment of the Allies on the city which left it in ruins. Vonnegut survived the attack by hiding in a slaughterhouse meat locker, hence the name of his groundbreaking novel, Slaughterhouse-Five.

Tour guide Danilo Hommel quickly saw the potential to turn Vonnegut’s story into an experiential morning for guests interested in learning more about the author and how the themes he addressed in his novel resonate today. today in Dresden. As part of the tour, you will also learn about the destruction of Dresden in February 1945 and the rebuilding of the city over the next half-century.

Planning tip: It is not always possible to enter the slaughterhouse itself – check with the tour guide in advance for the latest information.

3. Walk around the Zwinger

Dresden, in its rebuilt splendor, is a city to simply immerse yourself in, and the Zwinger – a prestigious piece of Baroque architecture right in the center of the city – is arguably the icing on the cake.

Intended to bear witness to the glory of the reign of Augustus the Strong, the Zwinger quickly became a cultural center until its destruction during the Second World War. The Soviets began reconstruction immediately after the war, largely restoring the building to its pre-war state in 1963. Today, it is popular with photo-hungry tourists, collecting different shots of the architecture and of the exquisite craftsmanship of the complex.

For many, standing in the heart of the Zwinger and admiring it all is enough, but if you appreciate a good museum, the Porzellansammlung (Porcelain Museum) has a priceless collection of over 20,000 artifacts. The museum’s traditional Chinese and Japanese collections, acquired by Auguste le Fort himself, are the main attraction.

Local Council: Listen to the chimes play at the Glockenspiel Pavilion every 15 minutes. The melodies are a mix of original compositions by Günter Schwarze and other well-known tunes.

4. Immerse yourself in the art of the Kunsthofpassage in Neustadt

Most cities have their street art districts and for Dresden it’s Neustadt (New Town) just across the Elbe from the Old Town. But it’s not just captivating images, Kunsthofpassage is an immersive experience.

There are a number of courtyards accessed through narrow lanes where you can literally walk through art. In Hof der Elemente (Courtyard of the Elements), there’s a series of twisting silver pipes that look like they belonged in a Mario video game before turning into a trumpet. The Hof des Lichts (Court of Light) contains projection screens to enable multimedia performances alongside metallic mirrors with colored reflections that change with the position of the sun. Finally, there is the Hof der Fabelwesen (Court of Mythical Creatures), which houses the paintings of artist Viola Schöpe and ceramic mosaics of peculiar beings that look like a mixture of Picasso and ancient Greek art alongside a two-story tall giraffe and some monkeys.

5. Take a panoramic photo of the sunset on Brühl’s terrace

Dresden and its photogenic old town can be overwhelming for anyone with a camera. The exquisite nature of the city begs to be captured again and again through the lens. For the perfect place to photograph, head to Brühl’s Terrace, nicknamed “the balcony of Europe.”

This impressive panoramic terrace extends for approximately 500 m (1640 feet) with a view of the Elbe. The name comes from Henrich von Brühl, an 18th century statesman who led the construction of various ornate buildings in Dresden. Stop a little before sunset to have time to stroll through the oriental garden before admiring the Renaissance-style terrace itself.

6. Lose yourself in the Residenzschloss Dresden Castle (or Royal Palace)

This castle in the Old Town is considered one of the most important of the Renaissance period, serving as a cultural and political center since the 15th century. Today, the Residenzschloss houses a variety of museums. There is the Dresden Armory (Rüstkammer) with its collection of armor and weapons, the Grünes Gewölbe, or Green Vault, which houses royal treasures, and the Turkish Chamber with its collection of Ottoman art – the one of the largest of its kind outside of Turkey.

At Kupferstich-Kabinett you will find an astonishing collection of around 500,000 drawings, prints and sketches by Rembrandt, Michelangelo and the German Albrecht Dürer. If that’s not enough, you can top it all off with the Münzkabinett – literally the coin cabinet – with 300,000 objects from around the world dating from antiquity to the modern era.

DEVIATION: Explore the royal roots of the Residenzschloss by visiting the east side of the building’s exterior where you can find the Fürstenzug fresco. This 102 m long (335 ft) work of art features the 35 rulers of the House of Mouillage, from the 12th century to the last kings of the 19th century.

7. Grab a cup of Glühwein and get into the Christmas spirit at Striezelmarkt

Germany is known for its Christmas markets or Weihnachtsmärkte which start at the end of November and last until the festive season in December. You’d be hard-pressed to find a city or town without some kind of Christmas market, with food, gifts and of course, Glühwein, Germany’s version of mulled wine.

If you had to visit only one Christmas market, the Striezelmarkt in Dresden is a good example. It is considered by many to be the oldest Christmas market in the country, dating back almost 600 years. Visiting Striezelmarkt on the outskirts of the city’s Old Town is like stepping into a winter wonderland, with all the sweet candy and pageantry you can imagine.

8. Sip a glass of wine at Schloss Wackerbarth

When exploring Germany’s famous wine regions, Saxony is usually not in the conversation. In other words, unless you’re talking about Schloss Wackerbarth.

Just outside Dresden, in the town of Radebeul, you can get to the winery and its romantic hills in just over 30 minutes from the main train station. The award-winning Wackerbarth is one of Europe’s oldest sparkling wine producers, with a well-deserved reputation. Fancy a drink? Tours are available daily from April to December and Tuesday to Sunday between January and March. Benefit from a tasting for 15€ per person.

9. Hike through the Bastei in Saxon Switzerland National Park

Saxon Switzerland National Park is one of the best national parks in all of Germany, and it’s right in Dresden’s backyard.

From the main station, board the regional EC train for a 25-minute journey to the charming spa town of Bad Schandau, nestled between some of the best sights the national park has to offer. Or take the S1 train for 38 minutes to Kurort Rathen for direct access to hike the Bastei, an incredible rock formation that rises almost 200m (656ft) above the Elbe with a bridge in vaulted sandstone. For a longer stay, set off along the 116 km (72 mile) Malerweg hiking trail divided into eight stages. Climbing is another option to experience the park up close.

Local Council: Summer crowds can get overwhelming in Bastei. But you can get similar views without the crowds by going further east in the park towards Schrammsteinaussicht along the Malerweg long-distance hiking trail.