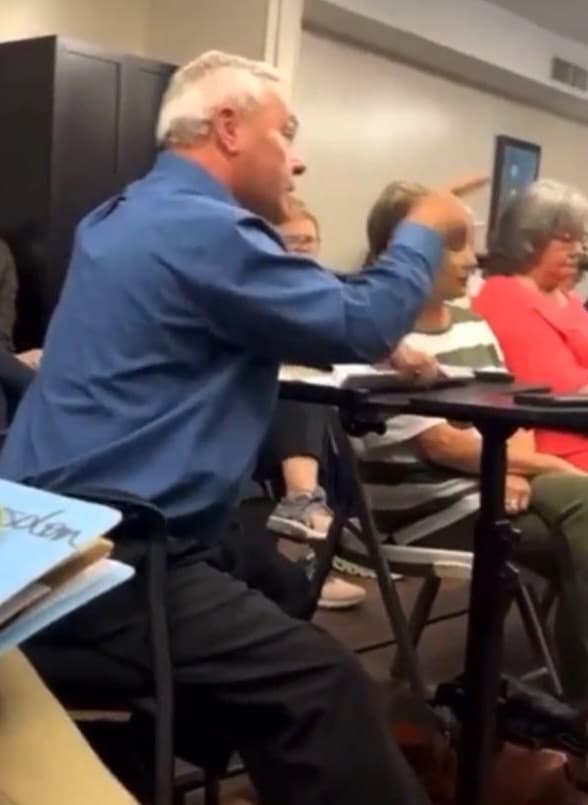 Mayor Washburn points his finger at Alderman Klutts while responding to his resolution.

At the board meeting, Alderman Anderson asked if they had stopped the design process for the municipal complex.

Washburn said, “It’s in limbo waiting for the board to make a decision.”

Anderson said, “We don’t need to spend any more money on the design until we actually own the land we’re going to put it on.”

Alderman Lindal Dilday asked how much they had spent so far and Washburn said he didn’t know the answer to that question. Chief Financial Officer Carla Edwards said, “We were billed $81,000.00. and we haven’t paid the full amount yet. Edwards said there were “a few designs done.”

Alderman Lyndal Dilday asked, “Why would we spend $81,000.00 on drawings for a building we don’t even own the land for?”

Washburn said it was a “good question”. He further stated that they had been given a budget for what it would be for the design and that “I personally was not aware that this money was being spent at such a high rate until now.”

When Klutts presented her resolution, she said, “When Mayor Washburn spent money to hire an architectural firm to produce designs for a proposed urban complex before the city had acquired the land for build it. After learning that we were not going to acquire land for the property, he let the company go ahead and give a second drawing and the cost for those drawings was around $80,000.00. These designs are costing the city money that we didn’t have to spend at the time and we’ve done so many designs and now we still don’t have a design to proceed with the property that we could find, which means we’ll have to spend money to make another one. Klutts went on to say that Washburn wasted the city’s money and cited this as one of many reasons his resolution called for his resignation.

Washburn responded by stating that the alderman had requested the drawings. “In terms of the second set or the third set of drawings – each of these requests were at the request of the council that they be made. There had to be a starting point for the proposals and that starting point was the first set of drawings. You may recall that Alderman Anderson requested that we do a second set of drawings to reflect some changes. We also had a set of drawings made to reflect a two-story set at the request of this council. As for that money – that money was a direct result of that council asking for those extra drawings to be done.

Washburn refers to council meetings where architectural drawings were discussed by him and council members on several occasions at previous council meetings, however, no motions were ever made at these council meetings to vote on the drawing up of the plans, nor the cost of the drawings ever brought up by Washburn to inform the board members of what it would cost for each set of drawings in the future. The council of aldermen has never voted once, at any meeting, on plans or costs.

City Archivist Jennifer Branscum was asked about it after the meeting to confirm whether or not there had already been a council vote for drawings or costs and she replied: ‘No, there isn’t. there was none. Drawings are on hold until council can determine how much land we will acquire for the new building.

Due to the 5 to 1 vote, the alderman implied that Washburn went of his own accord to have an architect draw up the plans – never telling council of the costs – knowing that the properties were not yet in the city’s possession, which ended up costing the city thousands of dollars that could have been avoided.

Many residents, including April Lieberman, former resident Jeniffer Green and Bobby Ray, said they planned to call the comptroller’s office or suggested others do so to report the embezzlement. Washburn said on the press’s Facebook page that “such a visit would be welcome as they would find this and report that all actions were requested and/or approved by the council”, again suggesting a council vote which never took place.

The total costs at this point are over $80,000.00 and this amount is expected to increase significantly when a final round of draws is made after the final amount of ownership is determined. The board found, in its 5-1 majority vote, that Washburn had misused the funds, which was only part of the reason for the vote for his resignation which he said that he would not accept and planned to run for a third term regardless.