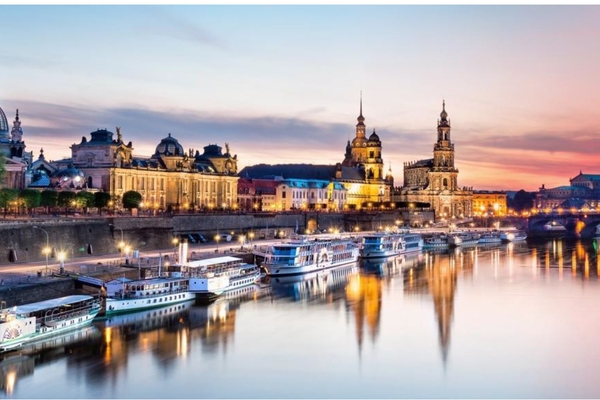 The Frauenkirche, the Zwinger, the Semper Opera, the Residential Palace, the Elbe, more than 50 museums and more than 30 theaters large and small, this is Dresden.

The city is one of Germany’s most popular tourist destinations. Millions of visitors come to Dresden every year to admire its many attractions. Dresden has a unique collection of historic buildings, great historical and artistic treasures and fascinates with its distinctive character.

The city owes its qualifier of “Florence on the Elbe” to the association of the richness of its art collections and the Italian influence on its architecture built under Augustus the Strong.

Dresden is the capital of the Free State of Saxony, the most southeastern of the 16 federal states of Germany. Just two hours drive to the north is the capital Berlin and to the south Prague, the capital of the Czech Republic. The city with its more than 540,000 inhabitants not only has a strong cultural attraction, it is also the political, economic and scientific center of the Free State of Saxony. Dresden is home to many research institutes and universities, among them the TU Dresden, which in 2012 was awarded the title of “elite university”.

But Dresden is not only the Saxon capital of business and science, it is also one of the greenest cities in Europe. The Great Garden, the vast meadows along the Elbe, the forest of Heide. numerous palaces, parks and green spaces in and around Dresden encourage its inhabitants and visitors to spend time outdoors and influence the quality of life in the city.

READ MORE Top 10 things to do in Leipzig

The green landscape of Dresden is further complemented by the vineyards on the slopes of the Elbe Valley. Wine is even grown in the city of Dresden itself, which makes Dresden the northernmost city with a winemaking tradition.

The colorful side of Dresden can be found in the artistic district of AuBere Neustadt with its characteristic buildings, many of which date from the end of the 19th century. The countless number of bars, cafes, restaurants, clubs, galleries and small theaters make this lively part of Dresden the undeniable center of Dresden’s young alternative scene. The Gründerzeit district embodies a highly creative spirit of innovation, which is reflected above all in the abundance of large boutiques and trendy labels.

Particularly in the summer, when the days are longer and warmer, rarely a weekend goes by without a major event taking place. Movie nights on the banks of the Elbe, the “Long Night of Theater and Museums” and the Elbhangfest are highlights of Dresden’s events calendar. The city’s festivals, including the Dresden Music Festival, Moritzburg Festival, Jazztage Dresden Festival, Dixieland Festival and Johann Strauss Festival, are among the highlights of Europe’s cultural scene.

Dresden Airport and Leipzig/Halle Airport offer many direct flights to and from major German and European hubs. From each airport, the city center can be reached in just 15 minutes by S-Bahn (city rail).