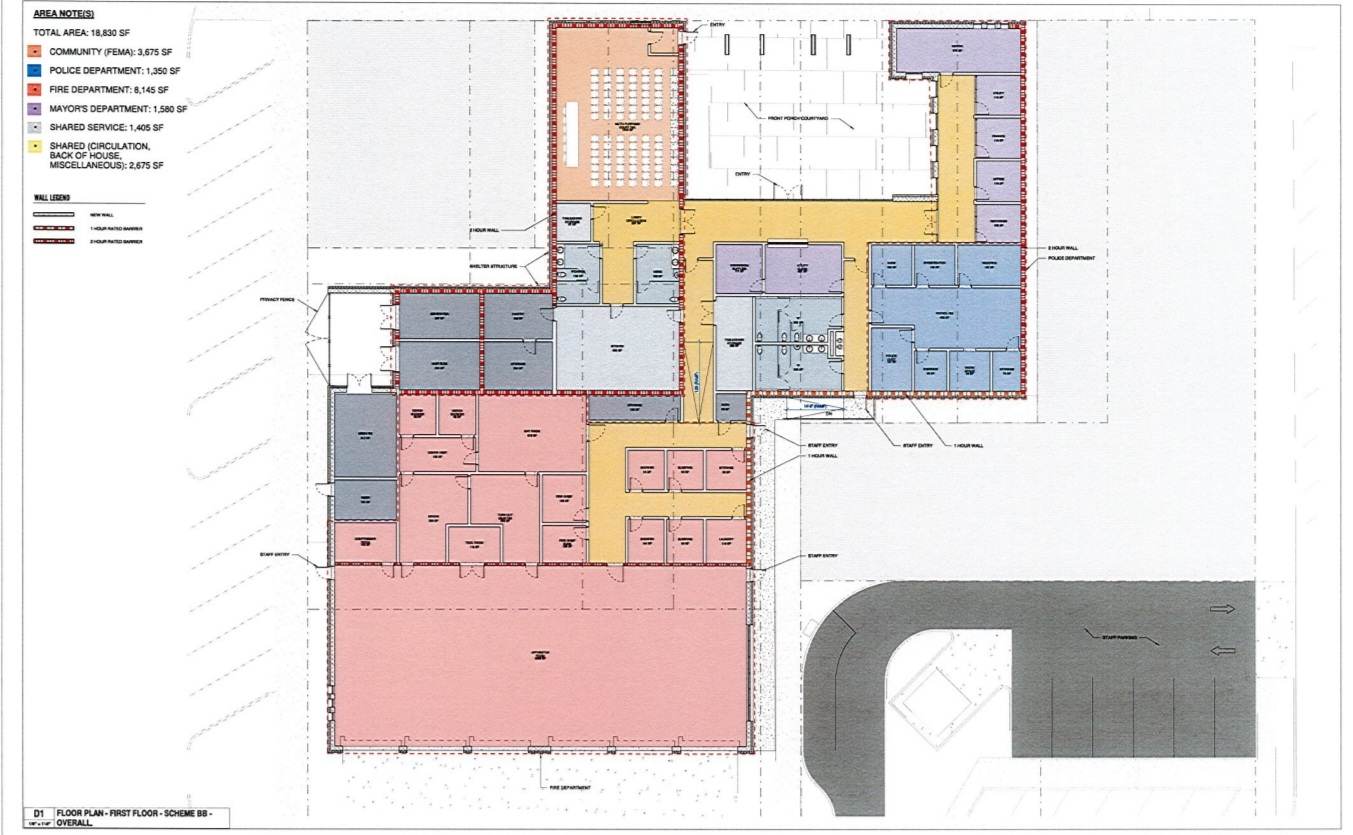 Updates were provided on the new municipal complex at the November 7 Council of Mayors and Aldermen meeting.

A2H provided an update on their scope of services which had to be amended to include additional redesign services. The proposal was based on a change in available ownership resulting from property acquisition issues. “A2H had to go back to the original conceptual design phase from the design development phase to make significant adjustments to the design to accommodate site limitations resulting from the property acquisition issues.”

A2H said that “several design options needed to be investigated based on the new site constraints as part of the return to the conceptual design phase” and that they “met with the city of Dresden to understand the new site constraints, developed several building layout and configuration options, met with the city of Dresden to review these options and had to adapt to the current construction in the east, including additional studies of the existing condition to locate and identify what has been built to date on the property to the east.

A2H said “every aspect of the building layout, floor plan, site design, grading and siting and drainage and utility design were affected by the constraints. adjusted from the site”.

The proposed compensation for all of the above was $64,780 and the board voted unanimously to approve the change.

During communications from the mayor, Washburn said the city’s TEMA contract has been signed and they are preparing to begin receiving funds for the cleanup.

Washburn gave the order to order new fuel injectors and bearings for the leaf machine and the cost was approximately $3300.00. It is currently in use until the new one arrives next year; however, Paris acquired a new sheet-fed machine and they told Director of Public Works Josh Lassiter that Dresden could use theirs if the Dresden machine broke down again.

During Citizen Contribution, Jeniffer Green spoke on behalf of Sunrise Cemetery requesting that a bin be donated. The motion was moved by Alderman Donnie Essary and seconded by Alderman Klutts, and it passed 5-1 with Alderman Kenneth Moore voting no. Moore asked, “Is it going to be okay for all the cemeteries in town?” Washburn said he didn’t know the answer to that question and that there were only two cemeteries in Dresden and if they did it for one they would probably do it for both.

Citizen Chase Kesterson requested that the packets read by the Alderman be put on Facebook so that everyone can read them. Anderson suggested it be put on the town website and Alderman Ralph Cobb made a motion and seconded by Essary. The motion passed unanimously.

Last month, Washburn received a proposal from Langdon Unger on behalf of Tony Winstead for $20,000 in cash paid to him plus the cancellation of the demolition amount and Winstead would look for a faucet for water and sewer on his property. A motion was made to accept Essary’s proposal and seconded by Anderson. The proposal was adopted unanimously.

The BZA’s appeal for approval of the Keisha Roberts home hair salon was discussed and Washburn advised the board that the BZA stood by its original decision. City Attorney Beau Pemberton advised council that if they voted to appeal the decision to Chancery Court, they would sue their own BZA and appoint a member of their own council, Cobb, who sits on the board of the BZA.

Pemberton advised Anderson and Cobb to refrain from any action for or against. Moore made a motion to continue but it fell through on the floor for lack of a second.

A sewer drilling bid was received for the property at the intersection of Highways 22 and 89 for the new Quick Mart Truckstop which was unanimously approved by council.

The next board meeting will take place on December 5 at 6 p.m. in Dresden City Hall under the leadership of the new mayor, Mark Maddox.