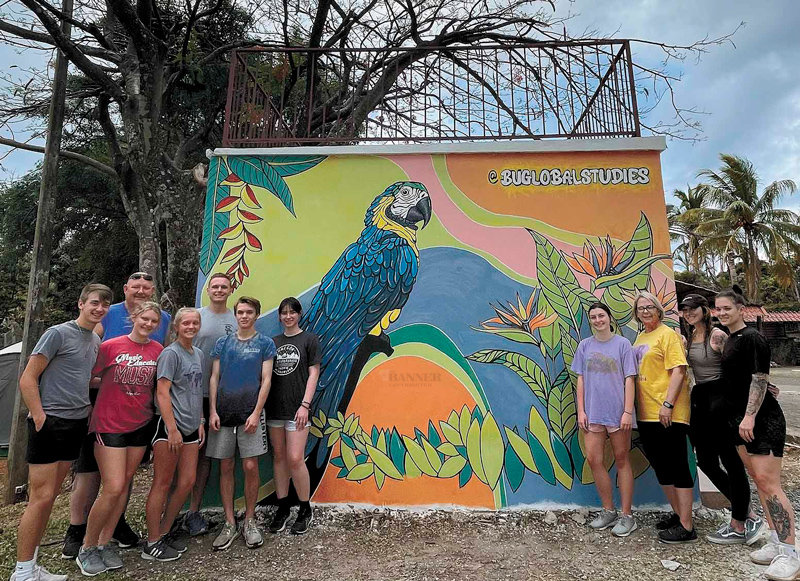 When Stacie Freeman saw the destruction wrought by the December tornado in her hometown of Dresden, one of her first thoughts was to cancel the March trip to Costa Rica she had planned for Dresden High students. . As the director of Bethel University’s global studies program and a sociology professor who offers dual-enrollment classes for schools in Weakley County, she weighed the cost of travel against the loss of experience. culture and initially determined that the local needs were too great.

She then answered her own question: “These students have already lost too much. COVID has upended their high school experience, they recently lost two coaches and mentors to illness and disease, and now this…a literal uprooting from their lives. I don’t want to add this unique opportunity to the list of things they lost. However, I also don’t want it to take away effort/resources from rebuilding our hometown.

The letter to former donors, Global Studies alumni, and his personal network of friends and family was the first outreach in several months of fundraising that ultimately covered most of the costs for five DHS participants who were registered for March 19-24, 2022, travel. While most high school and college students who choose to join his excursions to places like Colombia, Ecuador and Costa Rica usually fund themselves to pay for their program fees, Freeman has set out to ease this burden for the representatives of Dresden who had “lost their homes”. , churches, neighborhoods and/or jobs. »

Through her efforts, a total of over $6,000 was donated, allowing the student who lost almost everything in the tornado to fully fund and cover 75% of others’ expenses.

“The students and I were amazed,” she said. “They can’t believe the support and love they’ve received from people they’ve never met.”

The DHS group included Haley Brooks, Mark Maddox, Jacey McClure, LeeAnne Morefield and school resource officer Kristen Childress. Childress was the team photographer. Dresden High alumnus and now Bethel University graphic designer Jai-Chandler Mathis, Mark McClure and Patti Vinson also accompanied the band. Other travelers from Station Camp High School in Gallatin rounded out the team that collectively helped achieve the United Nations Sustainable Development Goals by working with nonprofit partners Rescue Center Costa Rica. They have dedicated a combined 244 hours in support of ending the illegal wildlife trade by caring for animals and painting a mural for the center. Mathis designed and traced the fresco representing the animals seen in the center. The students and adults finished the painting before completing their five-day trip. In total, their service had an economic impact of $7,654 in the host community.

Morefield, who had been on mission trips before but was on his first volunteer experience outside the United States, expressed his gratitude for the support the group received and the opportunity to support others afterwards.

“I was very grateful, especially to have been affected by the tornado. It showed me how much people really see you and how much they are ready to support you and how much they care about you” , she explained. “I knew I was going to work hard…I didn’t look at it like ‘oh, I’m going to go to Costa Rica and it’s going to be so much fun.’ The main thing was to volunteer. Seeing everyone behind me made me want to do it a little more; it gave me a bit more momentum.

In addition to caring for animals and painting the mural that covered an exterior wall, the group participated in multiple culturally immersive, authentic and educational experiences, including a jungle hike to a waterfall, a visit to a farmhouse family cafe and a day at the beach.

Morefield reflected on how what seems exotic to the traveler becomes part of the resident’s daily life.

“My favorite part was being immersed in the culture. They speak Spanish. They eat different foods. And all the variety of animals that we saw in the shelters, then we saw healthy animals in the wild. And that’s what they see every day,” she says.

The multicultural aspect was not limited to interactions with Costa Ricans, Brooks noted that she was happy to have worked alongside other rescue facility volunteers who came from other countries.

“This trip gave me the opportunity to experience what it means to be a global citizen by immersing myself in Costa Rican culture, meeting people from all over the world including Norway, Canada, England, Sweden and Denmark, and contributing 244 hours of volunteer work to the animal rescue center. This trip was very impactful,” she shared upon her return.

McClure also spoke of the trip expanding her cultural awareness. “I came back knowing how to connect with people from other cultures and help communities outside of my own.”

In addition to the inherent travel benefits, DHS seniors also earn three hours of college credit at Bethel, are eligible for the President’s Volunteer Service Award, and can apply their hours of service toward TN Fellowship requirements.

Maddox views the time spent as a worthwhile investment, adding, “The trip to Costa Rica with BU Global Studies was life changing. The bonds I have created with Travelers will last a lifetime. I really enjoyed the whole experience. I wouldn’t have preferred to spend my spring break any other way.

Freeman began providing global opportunities to area high school and college students in 2011. Since then, she has taught and led more than 400 travelers who, in turn, have contributed more than 28,000 hours of service in countries like Vietnam and Cuba. Prior to her recent trip to Costa Rica, she took a group to Colombia. In June, it will feature students from Greenfield and Dresden as well as alumni and students from Bethel University in Ecuador.

“Gaining a fresh perspective is such a gift, a great return on investment,” she noted of the Global Study Awards. “This trip is proof of that in many ways. Donors have invested to ensure that those who lost so much in the Dresden tornado lose nothing more. These representatives from Dresden, in turn, invested in Costa Rica and returned home with a deeper understanding of what they can do in the world. What a win/win!”