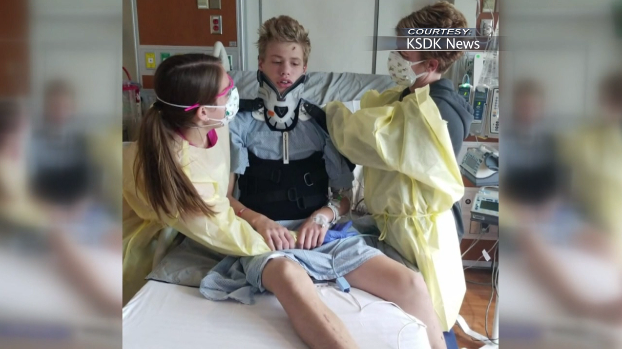 DRESDEN, Tennessee – In December, storms swept through four states and several cities and towns. One of them included Dresden.

“The house started dusting a bit, and you could see it and I was like it was for real,” Kimberly Koehn said.

“I dove down to the hall and sat down and heard the house start to break, and that’s the last we remember until we woke up in the field,” said Darwin Koehn.

They are the parents of 14-year-old Kyle Koehn.

During the December storms, the family had just returned home from dinner when a family friend informed them of the tornado warnings.

“He made the comment and he said keep your shoes on tonight,” Darwin Koehn said.

The storm almost destroyed the entire city of Dresden. And for the Koehns, most of the family was thrown 180 feet from their home.

Kyle Koehn was found a few meters away.

“He was moaning and I said, ‘Right there. This boy is badly hurt,” Darwin Koehn said.

“I don’t remember the pain so much. I just remember it was cold and wet,” Kyle Koehn said.

A few weeks after the tornado, Kyle Koehn was admitted to Ranken Jordan Pediatric Bridge Hospital. With his family also hospitalized in Tennessee, he made it a priority to focus on therapy.

“He had no feeling from his umbilicus, down to his navel, down. We knew this was a kid who was going to fight hard,” said Dr. Connie Simmons, a pediatrician at Rankin Georgia Pediatric Bridge Hospital.

And he did. After spending several weeks in therapy, Kyle Koehn was released on March 29.

However, it was not only his family who welcomed him warmly, but also people from his school.

“It’s going to be hard to leave. Honestly, they have become really good friends to us,” Kimberly Koehn said.

“They were wonderful. Couldn’t ask for more,” said Kyle Koehn.

Kyle Koehn still has some time to make a full recovery, but doctors expect him to continue improving every day.

Other updates from Dresden include: