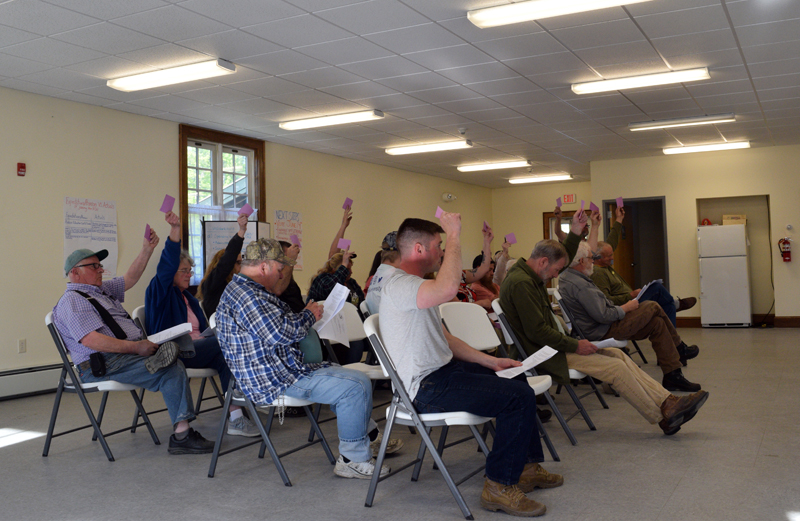 Voters in Dresden approved a new business license requirement and the sale of the city’s grader and rejected changes to the city’s land use and development ordinance regarding mobile homes during a special town meeting on Tuesday, May 24.

The discussion among the more than 20 residents got heated at times, prompting City Administrator Daniel Swain, who also moderated the meeting, to pound the lectern and call to order a few times.

One of the main concerns of residents was that the age of a mobile home is an arbitrary distinction that does not necessarily mean the condition of the structure.

“You can’t judge a trailer by its years,” said resident John Doray.

Doray mentioned that customers can’t buy a trailer less than 20 years old for less than $55,000. “It limits a lot of people who are just starting out,” he said.

Amy Gagné circulated photos of 30-year-old trailers in good condition. She said she doesn’t think age should be a determining factor in judging whether a mobile home is livable or usable.

“With the significant housing crisis we are going through right now, I don’t think now is the appropriate time to limit the homes that can come into the community,” Gagné said.

Voters also rejected an ordinance change that would have required mobile home park owners to notify the city of any sale or transfer of a mobile home within 10 days and provide the city with a list of current residents every year.

The change would also have required the park owner to receive a written statement from the tax collector “stating that no tax lien, tax assessment or other assessment is levied” on a mobile home before it could be sold or moved. This would apply to mobile homes that have been in the city for at least six months.

A violation of this article would have incurred a fine between $250 and $500.

Residents have expressed concern that if a mobile home park owner does not provide a completely accurate list of residents, they could be subject to a fine.

Swain explained that this change would help to better assess the value of properties in town.

Voters approved a new business licensing system that would charge $40 upfront and $10 each year for renewal. Businesses already operating in the city must now obtain a business permit under this section for $10.

Dresden Planning Board chairman Jeff Pierce said the purpose of the business license system is to track business activities in the city.

After a lengthy discussion in which Pierce explained some minor proposed changes to Article 5, Section 4 of the Land Use Ordinance, residents voted in favour.

The depth of any newly created lot having a street frontage of 200 feet or less must not exceed three times the minimum width unless a plan of subdivision is provided, according to the ordinance. Previously, the maximum road frontage in this section was 300 feet.

This change also eliminated a section on electrical inspection since the Dresden code enforcement officer cannot perform them under the Maine Uniform Building and Energy Code. The term “Certificate of Occupancy” was also changed to “Certificate of Compliance” to align with state code.

“We remove items that we can’t enforce,” Pierce said.

At the Dresden Select Board meeting after the town’s special meeting, the board approved a request for proposals that seeks sealed bids starting at $15,000 for the town’s 1979 John Deere grader.

The next regular meeting of the Dresden Select Board will be held at Pownalborough Hall at 5 p.m. on Tuesday, June 7.