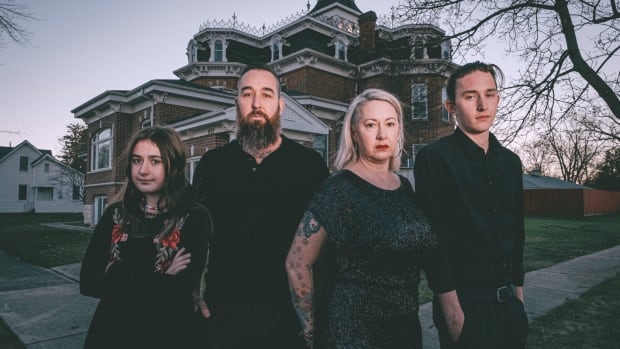 From funeral home to family home, a drug rehabilitation TV series is coming to Dresden

A new TV series documents a family’s experience of renovating an old mansion and making it their home. But there is a twist. Heather and Arryn Blumberg’s property in Chatham-Kent was once a funeral home.

At the start of the pandemic, they considered moving to a large house in a rural area, the couple explained. Online, they came across photos of a large Victorian property in Dresden, which is north of Chatham.

“We were struck by the architecture of the house and fell in love instantly,” Heather said.

Prior to the viewing, cyber sleuths revealed that the house was actually a former funeral home.

“That explains the scenery,” Heather said, with a chuckle.

But that didn’t put them off. The house itself – which Arryn describes as “frighteningly large at times” – won them over.

“We loved it. We knew we wanted to buy it from the first minutes of being here,” he said.

A home improvement show with a twist. A family moves to Dresden, a small town east of Walpole Island. They bought an old funeral home. Their plans are to turn it into a family home, and it was all captured for television.

The series, called We bought a funeral homedebuts on the Discovery+ streaming platform on October 1.

As well as showing the transformation of the house, the show promises spooky surprises along the way.

The couple had no previous television experience, but they were contacted by producers after their purchase of the property was reported on the Narcity website.

They lived in the house throughout the renovation with their two children, Noa and Rafferty.

“It was intense,” Heather said. There’s no two ways about it. It’s a huge construction project that we had going on. We had a television crew with us at all times.”

They are halfway through the renovation. The kitchen, dining room and family room are complete, as well as the bedrooms and bathrooms for the family.

They had fun with certain spaces in the house and played around with the funeral home theme, Heather said.