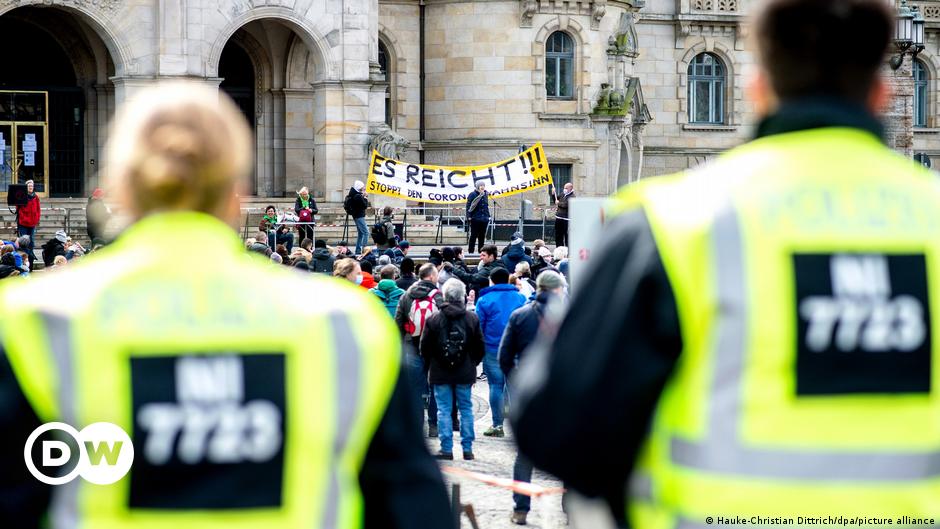 Thousands of protesters against Germany’s coronavirus restrictions took to the streets across the country on Saturday, leaving 12 injured in the eastern city of Dresden. Many of the protesters were members of the Querdenken (Lateral Thinking) movement, made up of right-wing activists, COVID-19 deniers and anti-vaccination activists.

Several arrests made during a demonstration in Dresden

At least 1,000 people showed up at the Dresden protest, and 47 criminal offenses took place during the march, including violations of gun control laws and assaults on police officers. A 36-year-old man was taken into custody and three others were arrested for criminal acts against officers.

In the nation’s capital, Berlin, some 1,000 protesters gathered outside the Federal Health Ministry. Fifty people were arrested by police over health and safety violations. A dozen counter-protesters also showed up at the event.

In the southern city of Stuttgart, more than 750 protesters showed up, many of whom were not wearing masks or social distancing. Protesters in Stuttgart rallied under the slogan “enough is enough”.

During the Stuttgart demonstration, journalists working for the public television channel SWR were attacked by demonstrators, but no one was injured. The journalists’ union DJV Baden-Württemberg condemned the attack on the press and expressed its solidarity with members of the media working under difficult conditions.

Police break up protest in Munich

In Munich, police broke up a demonstration near the Bavarian state parliament. According to police data, 2,500 protesters attended, despite only 500 attendees being allowed to take part in the event.

“The demonstration was interrupted by the police due to non-compliance with the conditions,” said a Munich police spokesperson.

Another notable protest took place in the western city of Düsseldorf, where 2,000 people had gathered. Hundreds had also demonstrated in Hanover.

The restrictions will last until the end of March

The German government has extended coronavirus restrictions until at least March 28, with restaurants, bars, sports and leisure venues closed since early November. The most recent set of restrictions calls for stores to open based on local infection rates.

Germany is currently seeing an increase in coronavirus cases, with the 7-day incidence rate of infections on Saturday rising to 76.1 cases per 100,000 people, from 72.4 the previous day. The German public health body, the Robert Koch Institute, has predicted that the incidence rate could soon rise dramatically, reaching 350 by mid-April.