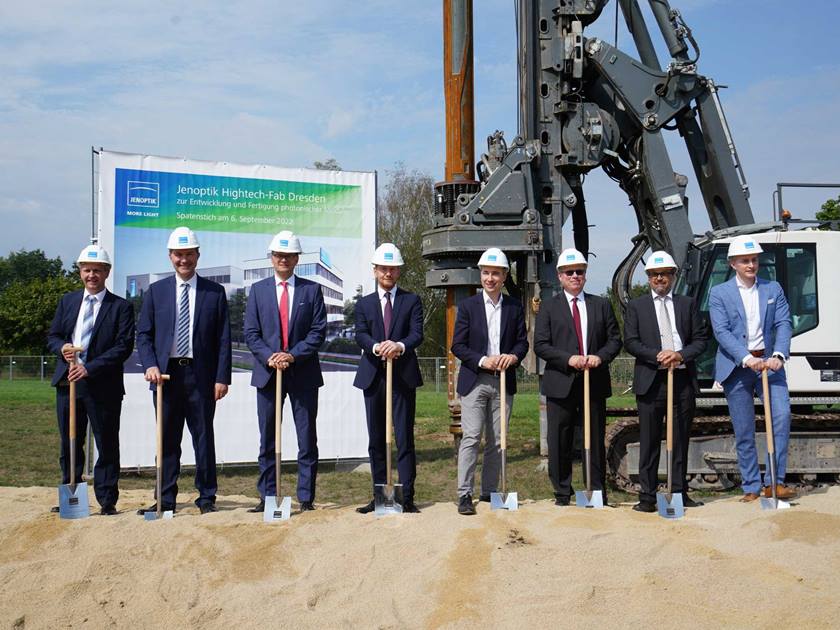 PITTSBURGH, September 9, 2022 — II-VI announced its change of name. The company, which finalized the acquisition of Coherent Inc. this summer, is now called Coherent Corp. The company has also launched a brand identity, which includes a corporate logo. The companies’ existing pre-merger websites, social media platforms and most product brands will continue in the near term as the transition to the new brand identity will be executed over the next few months.

JENA, Germany — Start of construction on Jenoptikof the high-tech factory in Dresden Airport Park. Jenoptik is investing more than €70 million (~$69.77 million) in the new factory, which will include 11,000 m² of net floor space, including 2,000 m² for clean room production. Production is expected to start in early 2025. The plant will manufacture micro-optics and sensors, which are mainly used in solid-state lithography systems.

Jenoptik invests more than 70 million euros in a production plant for micro-optics and sensors. The facility will open in 2025. Courtesy of Jenoptik.

CAMBRIDGE, England — Wave photonics is leading a £500,000 (~$574,968) Innovate UK project to develop packaging solutions for quantum photonic integrated circuits (QPICs) alongside Alter Technology partners TUV NORD UK, Senko Advanced Components, the University of Southampton and the University of Bristol. The Quantum Photonic Integrated Circuit Packaging (QPICPAC) project will develop a model-based approach to minimize custom development requirements and costs for quantum technology companies. The goal of the QPICPAC project is to develop design patterns and components to minimize the amount of custom work required, meaning packaging will be simpler and more affordable for those looking to exploit QPIC technologies. Quantum Dice, a startup developing QPIC-based quantum random number generators, will be a test customer for the project.

PARIS — Photonics and quantum technologies company iXblue and Welinq, a French startup developing quantum cold atom memories, has signed a strategic partnership agreement that allows Welinq to provide a range of quantum memory products directly to industry standards. It will be available in the market by 2024, the companies said. iXblue, which has developed an industrial-grade cold atom quantum system, will develop dedicated laser technology bricks for Welinq. 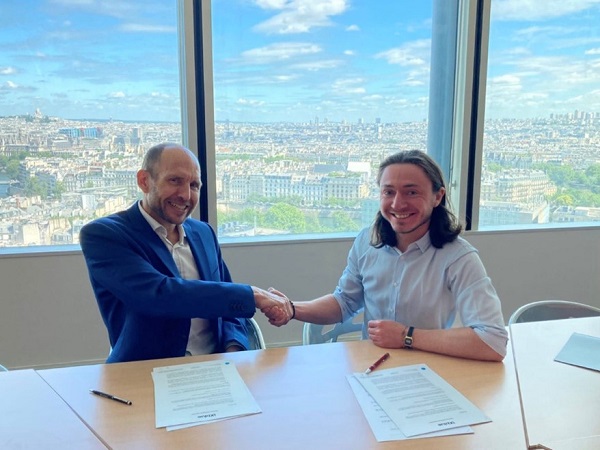 Bruno Desruelle, Managing Director of iXblue Quantum Sensors (left) and Tom Darras, CEO of Welinq, during the signing of the partnership at Welinq’s premises at Sorbonne University, Paris. Courtesy of iXblue.

TOKYO— NTT Corp. announced its development of a coherent digital signal processing circuit and optical device which the company claims has achieved the world’s highest capacity of 1.2 Tbit/s per wavelength for optical transmission . According to NTT, the technology has also achieved the world’s highest optical signal modulation speed of 140 Giga baud and doubles the previous world record optical transmission distance of 800 Gbps. As a result, the capacity of optical transmission systems will increase by 12 times, and the power consumption per bit will be reduced to 10% of the widely used commercial system. The transceiver consists of a coherent digital signal processing circuit and a 140 Giga baud class optical device. By increasing the modulation rate from 100 Giga baud to 140 Giga baud, greater resistance to waveform distortion and optical amplification noise caused by transmission could be achieved, NTT said.

Seoul, South Korea – Accurion GmbHa German developer and manufacturer of imaging spectroscopic ellipsometers and active vibration isolation, has been acquired by the manufacturer of atomic force microscopy systems Park Systems Corp. The acquisition, the financial terms of which have not been announced, adds to Park’s portfolio of atomic force microscopy and white light interferometric microscopy. Accurion is a spin-off from the Max Planck Institute for Biophysical Chemistry.

TOKYO— Nikon Corp. signed an investment agreement with a metal additive manufacturing company SLM Solutions Group (SML). In conjunction, Nikon AM, a direct subsidiary of Nikon, has launched a voluntary tender offer to acquire all outstanding shares of SLM on a fully diluted basis. SLM shareholders will be offered a cash consideration of €20 per share (~$20). The offer price represents an 83.7% premium to the volume-weighted average trading price of SLM’s XETRA stock over the last three months prior to (and including) September 1. Nikon AM has launched a separate public offer for the acquisition of certain convertible bonds issued by SLM. The total transaction amounts to 622 million euros (622 million dollars).

CORNING, NY— Corning inc. opened a fiber optic manufacturing plant in Mszczonów, Poland, to meet growing demand for high-speed connectivity. The facility, one of the largest fiber optic plants in the European Union, the company said, is the latest in a series of global investments by Corning in fiber and cable manufacturing, totaling more than $500 million since 2020. The facility adds approximately 250 employees to the company’s existing workforce of more than 3,000 in Poland.

HAUPPAUGE, NY — Chembio Diagnostics, a point-of-care diagnostics company focused on infectious diseases, has won a $3.2 million contract from the Centers for Disease Control and Prevention to develop a clinical validation of a point-of-care rapid diagnostic test. service for syphilis. Chembio will work to develop a syphilis screening and confirmatory test based on its Dual Path Platform (DPP) technology, which uses an optical analysis instrument and the proprietary DPP Micro Reader II. The test should only require 10 µL of fingerstick blood, serum or plasma and produce results in less than 20 minutes, the company said.