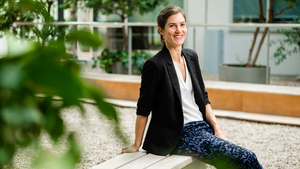 Elena Hassinger’s experiments create an environment colder than space. Last year, the low-temperature physics expert and her colleagues succeeded in discovering the unconventional superconductor CeRh₂As₂, a quantum material that exhibits two superconducting states and was the subject of an article in the journal Science. Usually, a single superconducting phase occurs below a certain transition temperature where electrons are transported without any resistance. This lossless conduction of electricity in superconductors has been one of the key topics in solid-state physics for decades and has become the great hope of energy technologies. “In the meantime, unconventional superconductors have taken center stage as they are the best candidates for room-temperature superconductivity,” says Hassinger. “Through my work, I hope to better understand the mechanism responsible for superconductivity in these materials.”

“Elena Hassinger is an expert in research on materials in extreme conditions, in particular at very low temperatures and in extremely strong magnetic fields. We are extremely happy that she enriches the pole of excellence ct.qmat with her experience. “, emphasizes Professor Matthias. Vojta, the spokesperson for the Dresden branch of the Cluster of Excellence. At the heart of Dresden’s success as a leading research location for solid-state physics, he points out, is also the good cooperation with the four non-university research institutes of the Max Planck Society, the Helmholtz Association and the Leibniz Association. Hassinger was also won over by the regional research landscape: “Dresden is the world capital of solid-state physics! Workshops and conferences regularly attract an international audience of high-level experts,” she explains.

The Ice Age in the Lab: Materials Research in Extreme Conditions

To demonstrate its unique properties, the unconventional CeRh₂As₂ superconductor must therefore be cooled to temperatures below those that can be found in space, where temperatures of around -270°C prevail. “It can take up to 24 hours,” says Hassinger, who uses a cryostat for this purpose in which helium-3 and helium-4 gases circulate in a complex circuit. This brings the experiment closer to absolute zero (0 kelvin): “We are able to cool material samples down to 0.01 kelvin (-273.14°C). I want to know what exactly happens in the material at this ultra-low temperature. “

In CeRh₂As₂, the special superconductivity occurs below a very low transition temperature of 0.25 kelvin (-272.9 °C). Even when applying a very strong magnetic field, this superconductivity is extraordinarily robust – which is new. The material can withstand a magnetic field of up to 14 tesla before the lossless current transport breaks down. By comparison, the magnetic field of a standard horseshoe magnet is 0.1 tesla. In the future, this property could lead to more accurate results in medical imaging. “In medicine, superconducting materials are currently used in magnetic resonance imaging scanners, for example. Our cerium-rhodium-arsenic compound can withstand a much stronger magnetic field in the superconducting phase than current superconductors. This could provide much higher image resolution,” Hassinger says. The strength of a magnetic field used in MRIs today is typically that of three tesla; in medical research, up to seven tesla are applied. “In the beginning, basic research like the one I conduct mostly leads to new knowledge. But the discovery of new materials with unexpected properties has always resulted in technological advancements over time.”

In autumn 2022, Elena Hassinger was appointed to a new professorship within the Center of Excellence, which was established at the Institute for Solid State and Material Physics at TU Dresden. In addition, she recently became a Max Planck Fellow, further strengthening the existing partnership between ct.qmat and the Max Planck Institute for Chemical Physics of Solids (MPI CPfS). “Doing research in this environment is great,” comments the physicist enthusiastically. Milestones in his scientific career include leading the independent research group “Physics of Unconventional Metals and Superconductors” at the MPI CPfS since 2014 and a tenure-track professorship at the Technical University of Munich from 2016 to 2022.

Center of Excellence ct.qmat
The ct.qmat Cluster of Excellence – Complexity and Topology of Quantum Matter is a joint research collaboration between Julius-Maximilians-Universität Würzburg and Technische Universität Dresden established in 2019. Nearly 300 scientists from over 30 countries and four continents conduct research on topological quantum materials that reveal surprising phenomena under extreme conditions such as ultra-low temperatures, high pressures or strong magnetic fields. The Excellence Cluster is funded by the Excellence Strategy of the federal and state governments and is the only cluster in Germany that crosses the borders of the federal states.