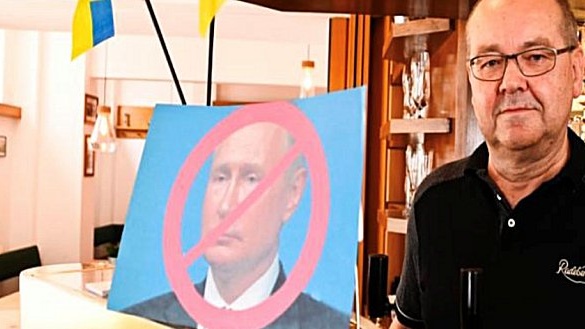 Vladimir Putin’s former local pub in Dresden has banned the Russian president for life and donates 10% of daily tips to help Ukraine.

For four years until 1989, Putin lived in the Saxon capital as a KGB agent and enjoyed ending his working days with a cold beer at the Am Thor pub.

“But if he should ever show up here again, he can turn on his heels and leave. . . I banned him for life,” said owner Joachim Müller.

Longtime staff remember the Russian regular as “quiet, withdrawn and down-to-earth”, someone who liked to drink the regional Radeberger beer but who could be tempted from time to time to try schnapps and the local specialty of spicy ground beef.

“But now he’s done a full 180 degree turn. . . he is a war criminal,” Müller said, adding that serving personnel have pledged to donate 10% of their daily tips to Ukrainian refugees for food and other supplies.

In a taste of things to come, the pub dismantled an altar of devotion to the politician three years ago to protest his policy towards his neighbours. On Friday afternoon, staff said the latest breakup with their famous client had passed with little fuss or sentimentality.

Waitress Josi Kickelheim said it was too quiet in the pub to know how regulars would react, but all staff support the ban.

“We donate cash and food to Ukrainian refugees and try to support them as best we can,” she said. “We can’t do much, but we’re doing our best.

It is unclear whether the Russian leader intends to return to Am Thor. His last official visit to Dresden was in 2009 to collect a “thank you medal” from the Saxon capital for his “fight for good”.