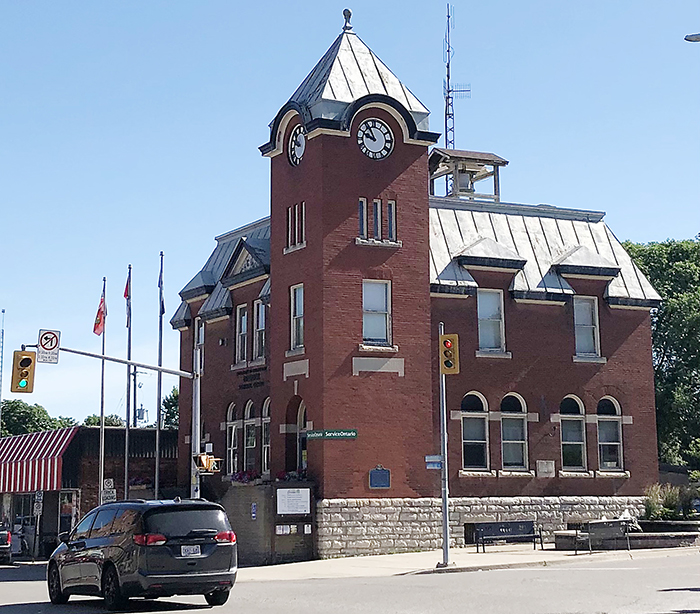 By Pam Wright
Journalist of the Local Journalism Initiative

So says Stuart Kiar about the possible closure of the Chatham-Kent Municipal Services Center in Dresden’s iconic clock tower building.

“The timing is not right,” said Kiar, a local lawyer and one of the leaders of the Dresden Shines community group.

“This comes a week after the announcement of the potential redevelopment of Chatham town centre.

“I support this development, as do many Dresden residents I have spoken with,” he said. However, Kiar noted that it “seems ironic” that the potential closure of the Dresden Civic Center follows so closely the announcement of downtown Chatham.

The deputation of Kiar, co-chair of the community group Dresden Shines with Cindy Brewer and Liz Kominek, was one of 105 submitted to Chatham-Kent council on June 20.

Deputies – who took more than two hours to read aloud – oppose the idea of ​​cutting in-person municipal services in Dresden, Ridgetown and Tilbury, as well as the end of municipal assistance offices in Bothwell, Thamesville and Wheatley.

What worries the inhabitants of Dresden is that the proposal recommends that the municipality dispose of the buildings concerned; which means that the historic brick monument in Dresden would be sold.

The clock tower has long been a focal point of the city, Kiar noted, and since the formation of Dresden Shines in 2020 after the May 16 miracle, a unique lighting system on the heritage structure has been regularly used to mark special occasions and highlight causes.

The report explains that requests for services have dropped dramatically during the pandemic as services increasingly move online, but Kiar said the conclusion is misleading.

Municipal information offices at libraries in Wheatley, Thamesville and Bothwells have been closed for more than two years, he said.

In Dresden, where a mix of municipal and ServiceOntario services such as permits and Medicare cards are offered, foot traffic is restricted to appointments only for provincial services.

Appointment-only practice for ServiceOntario in Dresden and Chatham began during the pandemic and has continued.

However, residents can access municipal services without an appointment.

Hoffman said the practice of requiring appointments continues in order to combat frustrating lineups, a situation that can be exacerbated by weather.

ServiceOntario has a contract with the municipality, but it is due to expire at the end of 2022. The proposal recommends that the municipality not attempt to renew the agreement unless the province chooses to pay the full cost instead. to subsidize a party.

Along with Kiar’s submission, deputations were received from ZAC Dresden and many prominent citizens and business owners in the community.

County of North Kent. Jamie McGrail, said she was unhappy that local groups were not consulted as part of the review.

Stakeholders, such as local ZACs, should have been included, she said.

“Community and business groups should have been notified and made aware,” McGrail said, adding that services provided by civic centers are “essential services.”

“I think there is a flaw in the way we get our message across,” she added.

McGrail said she agrees with some of the elements of the customer service review to improve services and reduce costs. However, she said savings for Chatham-Kent should not come “at the expense” of smaller communities.

County of North Kent. Joe Faas said the Dresden Municipal Building is a “community anchor”, adding that the deputations “speak for themselves”.

The customer service review came about following a motion by South Kent Coun. Clare Latimer in March 2021. The council directed the administration to find efficiencies and reduce costs by possibly changing the services provided through its municipal service centers and information offices.

It also examines how the municipality provides information to residents through its 3-1-1 telephone system and details how online services can be improved.

A 14-member committee made up primarily of Chatham-Kent trustees and some members from the private sector met weekly for a six-month period in 2021 to determine how municipal services could be changed.

Kiar said community groups in Dresden were exploring the issue, but noted that “the ball is back in the council’s court.

“It’s up to the council,” he said. “The administration simply acted on the recommendation of the board.

“They did exactly what was asked of them.”

The matter returns to council on July 11.