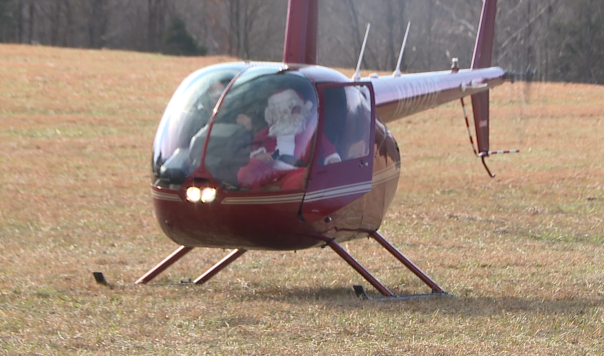 Santa Claus delivers toys by helicopter to children in Dresden

DRESDEN, Tenn. — Santa Claus came early for a local community this year. And he arrived by helicopter!

Several organizations have teamed up to bring Christmas gifts to those affected by the deadly tornado at Elks Lodge in Dresden.

“The least we can do is make these children’s eyes shine and let them know that the hopes and dreams are still alive, and we will get through this,” said Richard Trevathan, of Elks Lodge.

Trevathan says there were $50,000 in gifts purchased with the donations. He says they have more than enough gifts to distribute.

“We received two 18 wheelers full of toys, full of toys. Hundreds of people arrive with a bag or two or a box,” Trevathan said.

Rylan Holdeman came to see Santa, but says he came to do more than just share what’s on his Christmas list.

Jamie Petty came with a friend who was affected by the tornadoes and says it’s great to see a community come together to help each other.

“There are many for children, and their homes have also been destroyed. They have no toys for their children. I think it’s a great thing they’re doing for the community,” Petty said.

Trevathan says any toys that are not donated will be placed in a storage facility until they can be donated to children in the community.

Trevathan says more than 100 people showed up to the event to have a chance with Santa Claus.

B&E and stolen vehicle in Dresden