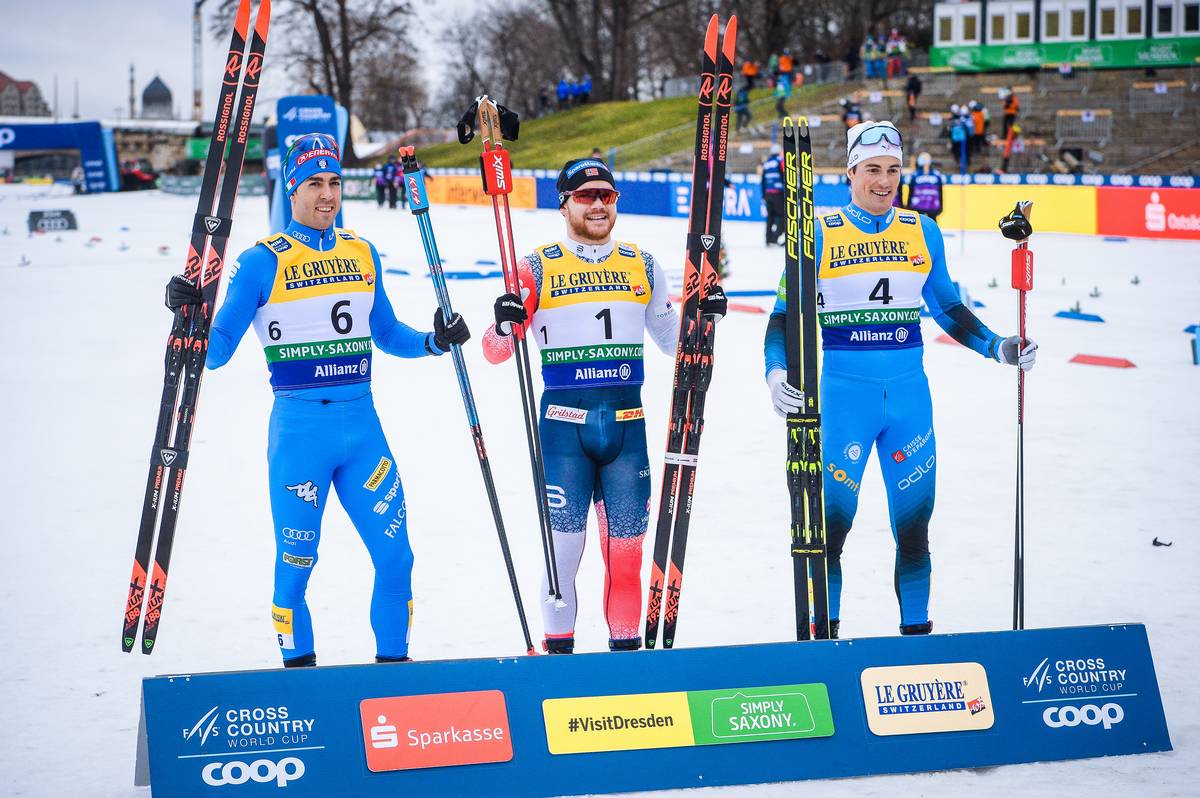 With Christmas decor bordering a ribbon of snow better indicating that we are nearing the end of Period I and heading into the holiday season than the surrounding green grass in Dresden, Germany, the athletes took to the track in the city for another iteration of his thrilling sprint weekend. Wet conditions well above freezing allowed for some fast racing on the two-lap course, which often sees spicy turns and tactics, without a significant climb to decisively separate the peloton.

If you want a throwback to January 2018, here is a video clip of Instagram where Simi Hamilton painfully confronts the plants, just after breaking the post of Johannes Hosflot Klaebo. This left Hamilton with a lip full of carbon fiber shards and numerous abrasions from the hard granular track. Good time.

After the first three race weekends, 21-year-old JC Schoonmaker was second in the U23 World Cup standings and 27th in the overall World Cup standings. Showing he was ready to build on this platform, Schoonmaker beat the qualifier, finishing third, 1.16 seconds behind the Norwegian. Håvard Solås Taugbøl and around 0.3 behind Richard Jouve of France, who qualified second.

In an episode of Nordic Nation taped earlier this week, Schoonmaker, along with teammates Ben Ogden and Gus Schumacher, explained how their results in early season races encouraged them to push their limits and take risks in their sprint as they transitioned to their senior. racing careers. Instead of going for round four or five, which they say shows you’re limiting your potential on semi-final day, they wanted to start racing in earlier rounds with the top qualifiers. Increase their risk of being eliminated early, but also learn what it takes to advance further in the rounds.

Today Schoonmaker raced in the first run alongside Taugbol and Jouve, with Even Northug (NOR), Johan Häggström (SWE) and his teammate Logan Hanneman, who qualified 7th, 28th and 30th respectively.

The first lap of the race, the pace was fast but the men looked cool, each carefully navigating the hairpin bends and not running aggressively. As they accelerated into the second lap, Schoonmaker kept in contact with Jouve, who was not in the lead, but was still racing in a controlling position up front with Taugbol. Dropping into a tuck after a roll and rounding the hairpin safely, Schoonmaker headed into the home stretch behind Jouve. As they raced through the final lanes, it was Taugbøl and Jouve in the lead for a photo-finish, with Northug finishing just ahead of Schoonmaker from close range for third and fourth place.

As the remaining quarter-finals progressed, it became clear that Round 1 was the fastest, allowing both Northug and Schoonmaker to advance to the semi-finals.

Hanneman also stayed in touch throughout the heat, finishing 1.88 seconds behind the leaders but sixth in the heat. With the final rounds decided, Hanneman’s position was 30th overall that day.

Also racing in the quarter-finals, Canadian Graham Ritchie qualified in 16th and raced in the fifth quarter-final round. In a competitive position throughout the second lap, Ritchie entered the final hairpin on the inside of the curve, looking to slide into position before the final stretch. Perhaps lacking real estate along the v-board, Ritchie fell, losing position and the ability to advance further. He ends his day 26th.

A post-race Instagram story posted by Ritchie’s trainer, Erik Bråten captioned “sh*t happening” showed that his ski tip had broken and the base had delaminated – not ideal.

Running into the first semi, Schoonmaker looked comfortable and flowing, approaching the heat similar to the first in terms of positioning heading into the second round.

In the lead, the Italian Federico Pellegrino, winner last year, set the tone alongside Taugbøl, with Jouve in a strong position on their tails.

Trusting his boards and catching a quick draft, Schoonmaker dropped low again as he descended the final roll and into the final curve. Once again he was trailing Jouve and in contact with the front of the peloton, however, as they headed down the final lanes he was only in position to take fifth in the heat, unable to reach the last lap.

In a post-race interview, Schoonmaker discussed his decision to select run one, as well as warming up his roller ski, maintaining the headspace needed to perform between runs and what awaiting him over the next few weeks. A quick note, we had issues with the WiFi connection which interrupted some of Schoonmaker’s comments. Remote reporting trials from eight time zones.

Taugbøl won the first semi-final, with Pellegrino remaining narrowly ahead of Chanavat in second and third. Jouve was just 0.3 seconds behind his team-mate, leaving the two Frenchmen waiting to see if they would advance as lucky losers.

Lead changes and close races developed the plot of the second round of the semi-finals, which featured Northug and his teammate Sindre Bjørnestad Skar is battling for position with two Russians, Gleb Retivykh and Alexander Terentev, who beat Klæbo in the opening sprint in Ruka and is currently just ahead of Schoonmaker in the U23 standings.

Each unable to break away up front on the fast, flat tracks, Northug, Skar and Retivykh came on in unison, kicking their boots for a three-way photo-finish. Although their times were indistinguishable, it was determined that their finishing order was just that: Northug, Skar, Retivykh, with Terentev a ski length away in fourth. Men crashed in all directions as they crossed the line, falling to the ground and gasping for air to prove the intensity of the effort.

On the clock, Jouve and Terentev were on the wrong side of the lucky loser’s cusp. They ended their day in the semi-finals, while Retivykh and Chanavat qualified for the final.

No more head changes and thrills, Chanavat took the lead on the first lap of the Final. Crossing the finish line for the first time, Taugbøl moved forward as Pellegrino hid on their tails. On the backstretch, the Italian joined Chanavat, powerfully skiing over Taugbøl’s tails as they safely rounded the first hairpin. Not looking to give up space, Taugbøl held himself in a commanding position up front.

Around the final curve, Pellegrino attempted to sneak outside Taugbøl, but could not gain enough ground to find the lead. Approaching the final straight away, Pellegrino attacked the track with a powerful V2, but it was still Taugbøl who had the lead, crossing the line just 0.15 seconds ahead of the Italian. .

In pursuit, Frenchman Lucas Chanavat crossed the line a ski length behind Pellegrino for the third step of the podium (+0.68), with Northug, Skar and Retivykh crossing a few meters behind to close the last heat in fourth (+ 1.22), fifth (+2.01) and sixth (+6.15).

“It feels good,” he humbly told the FIS after the race. “It’s of course a goal I’ve been trying to achieve all my life, and to do it in Dresden in a sprint hall is really fun and I’m proud of myself today.”

Taugbøl also spoke to his highly respected opponents with whom he shared the podium.

“Of course beating guys like Pellegrino and Chanavat is a dream come true. If you try to count how many podiums and wins they have, I can’t count so far. So it’s amazing to be there with them.

Although he won’t add another win to his resume, today’s result may mark a turning point in Pellegrino’s start to the season. The Italian, who has been a force in skate sprints for many seasons now, had yet to race in a final this season.

In an Olympic year that includes a free sprint, Pellegrino will be looking to return to peak form in February. The Italian finished 11th in the event at the 2014 Olympics in Sochi, and took second place in the classic sprint, his weakest discipline, in PyeongChang in 2018, just behind Klaebo.

Outside the top 30, Kevin Bolger, who finished 6th in the individual sprint in Dresden last year, qualified 42nd (+7.97). Bolger was about two seconds out of the top 30.

The urban sprint weekend continues tomorrow with the men’s and women’s team sprints.