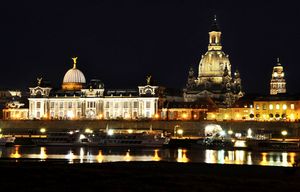 The German city, burnt down during the Second World War, has become a thriving cultural center.

Intriguing Dresden, Germany finds itself on far fewer US itineraries than it deserves. Don’t make this mistake. Since its horrific World War II firebombing, the city has become a thriving cultural center well worth a visit. Even with just a day to spare, Dresden is a doable detour from bigger attractions like Berlin or Prague.

The market town surprises visitors with whimsical Baroque architecture in a walkable cityscape, a history that mixes tragedy and inspiration, and some of the best museums in Germany. A generation ago, Dresden was dreary, but today it’s young and vibrant, teeming with proud locals, cheerful tourists and carefree students who have no memory of communism.

Even so, Dresden’s legacy of destruction is hard to ignore. I will never forget standing in the Altmarkt square in the old town…just another square. Then, looking at the cobblestones, I saw an inscription that read: “After the air attack on Dresden on February 13-14, 1945, the corpses of 6,865 people were burned there.” Etched on a piece of granite above was a simple statement: “We brought war to the world, and eventually it came back to us.”

If you are going to

Hotel Kipping has 20 quiet and tidy rooms behind the station. The original building survived the firebombing of 1945 and even served as a shelter (moderate rates).

Aparthotels an der Frauenkirche let 100 units in beautifully restored houses in the heart of the old town (deletion).

Buy a day pass for the trams – they’re cheap, easy to use and run every few minutes. Otherwise, the most interesting sights can be reached on foot along the south bank of the river.

Four epochs shaped Dresden: its golden age in the middle of the 18th century; the devastation of the city during World War II; the communist regime (1945-1989); and the current era of “post-reunification reconstruction”. Each city view gives a glimpse into this timeline, so I like to weave my visits into a day walk for the most comprehensive and meaningful visit. The highlights are conveniently clustered along the charming Elbe promenade, nicknamed the Balcony of Europe.

I start with Theaterplatz, the main square that houses the statue of King John of Saxony, a mid-19th century ruler who preserved Saxon culture in Germany. The buildings in this square – like many of Dresden’s landmarks – are being rebuilt to resemble their pre-bombing facades. At the end of the square, the vast Zwinger Palace was once the site of lavish royal celebrations held by the Wettin dynasty, which ruled Saxony for eight centuries. Today, this Baroque complex is filled with three museums, including the Old Masters Gallery, displaying works by Raphael, Titian, Rembrandt, and more.

Across the street, the once-destroyed Royal Palace is being rebuilt – with galleries opening as they are completed. Here I visit the Historic Green Vault. The Wettin dynasty’s big shot, Augustus the Strong, began his collection of Baroque treasures here in the early 1700s, and the extravagant hoard is clearly designed to impress. Ivory, silver and gold trinkets are dazzling examples of “Gesamtkunstwerk” – a symphony of artistic creations, though obnoxiously garish by today’s tastes. (It is important to reserve tickets well in advance; the number of visitors each day is limited to protect the collection.)

The highlight of my day is a stop at the symbol and soul of the city: Frauenkirche (Church of Our Lady). After World War II, Frauenkirche remained a pile of rubble and turned into a monument of peace. It was only after the reunification of Germany in 1990 that the decision was taken to rebuild it completely and painstakingly. More than a decade and 100 million euros later, it reopened in 2005. Inside, the circular nave is bright, welcoming and poignant, with a twisted old cross, which fell 300ft and burned in the wreckage of the bombardment. Lost until restorers discovered it from the wreckage in 1993, it stands exactly where it was found – still relatively intact. The persistence of this cross symbolizes the themes of the church: rebirth, faith and resolution.

Frauenkirche dominates Neumarkt, a once central square surrounded by the houses of wealthy merchants. The eight neighborhoods surrounding Neumarkt have been rebuilt to resemble the facades of the original structures, and the neighborhood is alive again with bustling cafes. A statue of Martin Luther holding his self-translated Bible reminds passers-by of the Reformation that began in nearby Wittenberg.

A short walk down to the water takes me to the end of the Balcony of Europe, where the modern art museum Albertinum has a fine collection of works by Gaugin, Monet, Picasso and Rodin and other romantic and contemporary masters .

Dresden’s intense history and remarkable museums can be overwhelming. To relax after my walking tour, I head to the new town (Neustadt), on the other side of the river. The bombs missed most of this area, so it retains its worn pre-war character. With hardly any views, the neighborhood is becoming the buzzing part of town that’s best after dark, when the funky New Outer Town sets the tempo for Dresden’s hip nightlife.

Today Dresden is rebuilt, full of life and wide open to visitors. These streets paint a picture of the city’s highest ups and downs, but in this era of cultural renaissance, Dresden is at its peak.

Photos: 70 years ago, Dresden was destroyed. This is what it looks like today