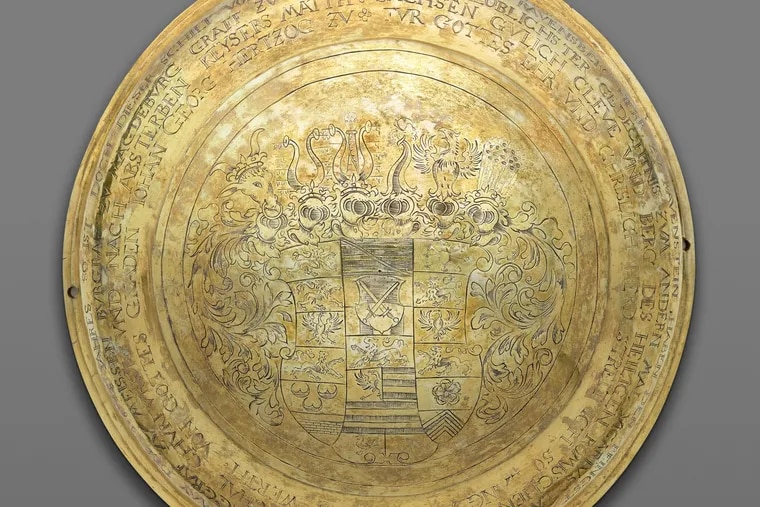 For the second time in less than a year, the Philadelphia Museum of Art has reached an agreement to return a valuable cultural artifact to its historic home in Europe.

A 17th-century silver “archer’s trophy” came to the museum as part of Carl Otto Kretzschmar von Kienbusch’s famous collection of arms and armor in 1976. The trophy – effectively an ornamental shield – had been fashioned in 1619 and awarded by Dresden to Johann George I, Duke of Saxony, in honor of his triumph at the annual shooting of the popinjay contest the previous year.

The unusual trophy is engraved with the Duke’s coat of arms surrounded by a list of his titles and a description of his triumph at the annual popinjay shoot.

Last September, the museum announced it would repatriate a 16th-century ceremonial shield – also part of the Arms and Armor collection – which had been stolen by the Nazis during World War II in what was then Czechoslovakia.

The two cases, involving first the Czech Republic and now Dresden, underscore the continuing difficulties posed by the repatriation of missing artifacts and artworks following World War II, museum officials said. In both cases, the museum’s research has highlighted concerns about the origins of the two artifacts in its collection.

Timothy Rub, former director of the Art Museum, praised “our thoughtful scholarship” which ultimately led to the trophy’s return to Dresden.

“Although it was bought in good faith in the 1950s and then donated to the museum, this object rightfully belongs to Dresden, as it became clear that it was part of the city’s silver hoard and that it disappeared in 1945. Our thanks to our former curator Dirk Breiding, whose in-depth study identified the problem, and to our wonderful colleagues in Dresden.

The trophy will go on display in Dresden for the first time in nearly 80 years on Saturday.

The trophy is representative of a centuries-old tradition of a Dresden bird shooting competition. As early as 1440, a shooting match took place in Dresden at Pentecost, from which a folk festival with bird shooting organized by the city council developed in the second half of the 16th century.

In 1888, the Duke’s archer trophy was part of the collections of the city of Dresden and the treasury of the city council. It disappeared, along with the rest of the city’s silver hoard, from the basement of City Hall around the time of the 1945 Dresden bombing.

In 1956, the trophy appeared on the European art market. Kienbusch, the collector, bought it and bequeathed it to the Museum of Art along with the rest of his collection in 1976.

Dirk Breiding, the museum’s former curator, who was preparing a catalog of the museum’s arms and armor collection in 2016, found a wanted poster for the trophy in an online register of missing cultural objects, the German database Lost Art, which the Stadtmuseum Dresden had published four years earlier.

The outbreak of the pandemic prevented earlier repatriation.

Dresden Mayor Dirk Hilbert in a statement called receiving the trophy after such a long absence a “very special privilege”.

He said: “I would like to thank everyone involved for their extraordinary commitment and I am delighted for the people of Dresden that this treasure will be on display in the Dresden City Museum from Saturday 2 July.”