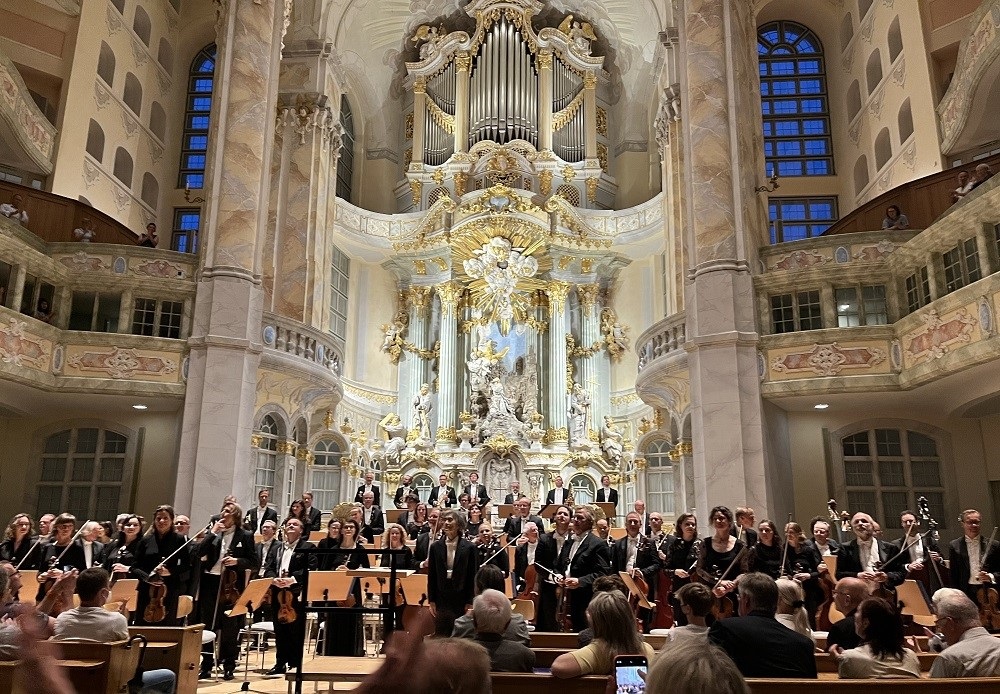 theartsdesk at the Dresden Music Festival

My visit also coincided with the Dresden Dixieland Festival. This is a large open-air event, with stages in each of the city’s historic squares. As you stroll through the baroque streets, your steps synchronize with a gently persuasive bassline from a distant sousaphone. Then you’ll turn a corner and be confronted with the abrasive tone of an over-amped banjo solo. The standard attire is a straw boater and thick red suspenders.

But go to one of the festival venues and you’ll find a more formal atmosphere – it’s all relaxed and friendly, but the mainstream audience here still likes to dress smart. The Dresden Music Festival has been around since 1978. It was originally founded by the GDR government, but has successfully transitioned over time. Since 2009, the artistic director has been cellist Jan Vogler. It fits perfectly with the local character of the festival and its international aspirations. Vogle (shown below in concert by Oliver Killig) grew up in East Berlin and, at age 20, became the principal cellist of the Staatskapelle Dresden. Shortly after reunification, he moved to New York to pursue a solo career. He is still based in the United States, but returns there regularly. In 2005 he performed at the official opening of the restored Frauenkirche. Vogler is happy to project his own interests and passions onto the festival, and this year’s main theme is “Cellomania 2.0”. They’ve done it before – hence 2.0 – “but it’s a lot more elaborate this time around,” he says. “Now it’s 19 shows, almost a third of the schedule.” The line-up is impressive and includes Sol Gabetta, Daniel Müller-Schott, Sheku Kanneh-Mason, Christian Poltéra, Misha Maisky and Gautier Capuçon. There’s also a concert by the 12 cellists of the Berlin Philharmonic Orchestra, a concert of cello and Persian music by Kian Soltani and, more intriguingly, Apocalyptica, a Finnish “symphonic metal” cello group.

This weekend, the sampling began with the concert of the Dresden Philharmonic Orchestra at the Frauenkirche (pictured above). On paper, Kent Nagano’s program seemed haphazard and diffuse: Ives’ The unanswered question, a short percussion work by Toshio Hosokawa and Bruckner’s Sixth Symphony. But as he entered the church, his thinking made perfect sense. The acoustics here are unique. This immense and imposing dome engulfs the sound then restores it to you in a progressive and homogeneous reverberation. It’s a clean and simple breakdown, just very, very long. Each of these works had been chosen to fill the space, to communicate through the place rather than to compete with it.

The unanswered question was a perfect choice. Ives envisioned a small string ensemble, but the full string section of the Dresden Philharmonic Orchestra, playing at the quietest dynamics and with minimal vibrato, proved fascinating. The solo trumpet (unmuted) was high up in one of the galleries. Its sound was picked up in the cupola and distributed evenly throughout the church – it could have been anywhere. The Hosokawa Intermezzo is taken from his recent opera Stilles More, about the 2011 tsunami in Japan. It consists of four percussionists playing large untuned drums and tam tam. They produce sound waves, an almost literal representation of the subject of the opera. These waves effectively rolled around the space here. 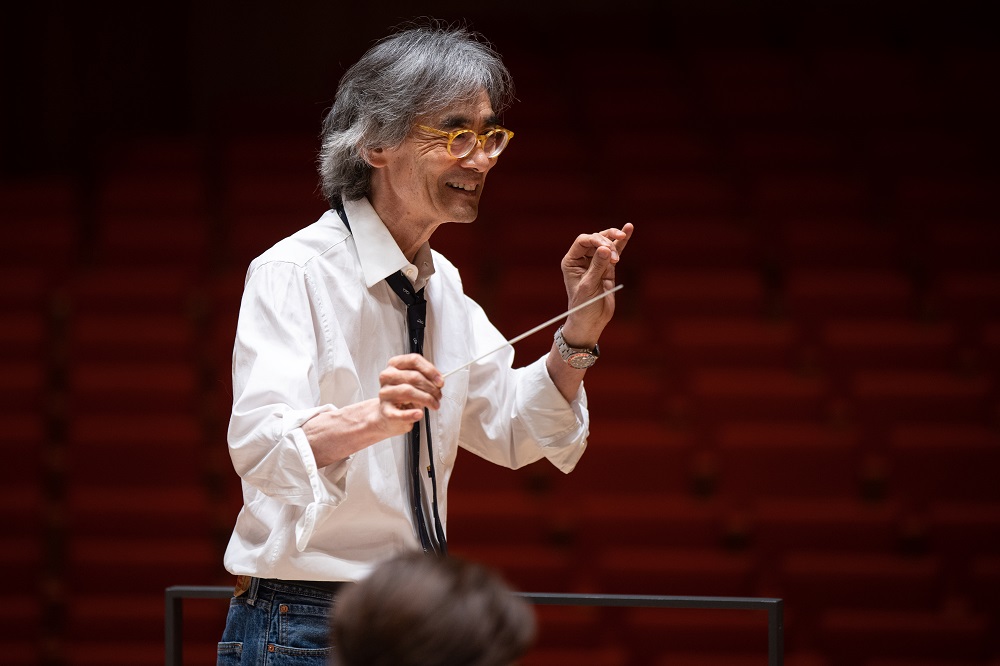 Nagano (pictured above in rehearsal by Bjoern Kadenbach) played Bruckner a lot, in Munich, Dresden and Berlin, but many listeners expressed reservations. His tempos can be erratic, with little sense of flow from idea to idea. That was also the case in this performance, but it had moments of redemption. Nagano is usually on the fast side with Bruckner, and he made no concessions to acoustics. Some details have been lost, especially in the woods. The result was increased dramatic weight, with the warm, round sound of strings and brass filling the church and embracing the audience. The most effective movement was the Adagio. Here, Nagano maintained a steady, slow pace. Again, the warm tone of the strings provided a lush sound bed, on which the wind soloists could express themselves freely.

The next day Dresden’s other great orchestra, the Staatskapelle, performed at his home, the Semperoper (the concert shown below), and under the direction of its conductor, Christian Thielemann. Like the Philharmonic Concert, this was part of the orchestra’s main season and had been co-opted into the festival. Vogler explains: “I want local orchestras to be part of the Festival. This way visitors can understand that Dresden is a city of music. The Festival is both a window on Dresden and a window on which to look. Thielemann favors a traditional East German sound – warm, rich strings; winds of character but mixed – and sticks to the basic Austro-German repertoire. 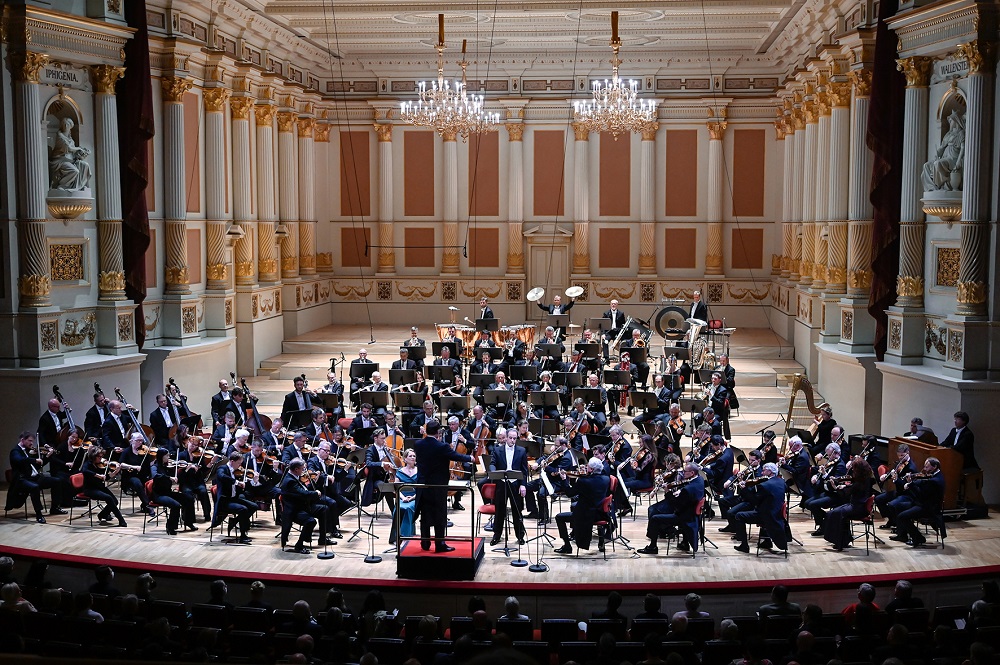 For starters, Mendelssohn’s “Scottish” Symphony, No. 3. Thielemann’s big sound is appealing to Mendelssohn and sets him apart from the more refined, period-inspired approach that has become convention. As with everything he directs, Thielemann makes it his own. His sense of long lineage works just as well in Mendelssohn as it does in Wagner. The slow introduction to the first movement has unfolded here as a single, coherent statement. In the faster sections, the weight of tone and even tempos were effectively balanced by incisive and varied articulation of the woodwinds. Thielemann is performing all of Mendelssohn’s symphonies next season, and a recording of the cycle is to be expected. The microphones were out for this performance, so that will probably be included.

Thielemann’s sense for line and texture, and his experience of Wagner, made him a natural for Zemlinsky. Lyric Symphony. The work is a setting for baritone and soprano of texts by Rabindranath Tagore, the style somewhere between Das Lied von der Erde and gurrelieder. In lesser hands it may feel drawn out and listless, but the rich colors Thielemann draws from the Staatskapelle, combined with the sense of purpose in his phasing, elevate the music. Christian Gerhaher was replaced at short notice by Adrian Eröd. It seemed like a mediocre exchange, but in the event Eröd fully lived up to the huge demands of the score. His operatic delivery was incisive and clear, with plenty of tonal character. Soprano Julia Kleiter was less impressive. She has more difficulty with Zemlinsky, but has often been beaten by the huge orchestra.

Then a guest orchestra, the Frankfurt Radio Symphony under the direction of conductor Paavo Järvi (shown below by Olivier Killig). Jan Vogler chose the orchestra and conductor especially for his own interpretation of Dvořák’s Cello Concerto, the centerpiece of Cellomania 2.0. It might seem like a curious choice: Vogler, originally from East Germany, grew up in the performing tradition exemplified by the Dresden Philharmonic and the Staatskapelle. So why play with an orchestra and a conductor known for their clean and analytical approach? Vogler explains, “My sound changed because I moved to America. I wanted to. You have to open up to influences, and when you do, you never get lost. I grew up in East Germany , so, as you can imagine, my feeling was, ‘I want some air!’ I chose the Frankfurt Radio Orchestra and Parvo because with this piece it’s good to have a chef who cares about shape and form, otherwise it can get too elaborate.” 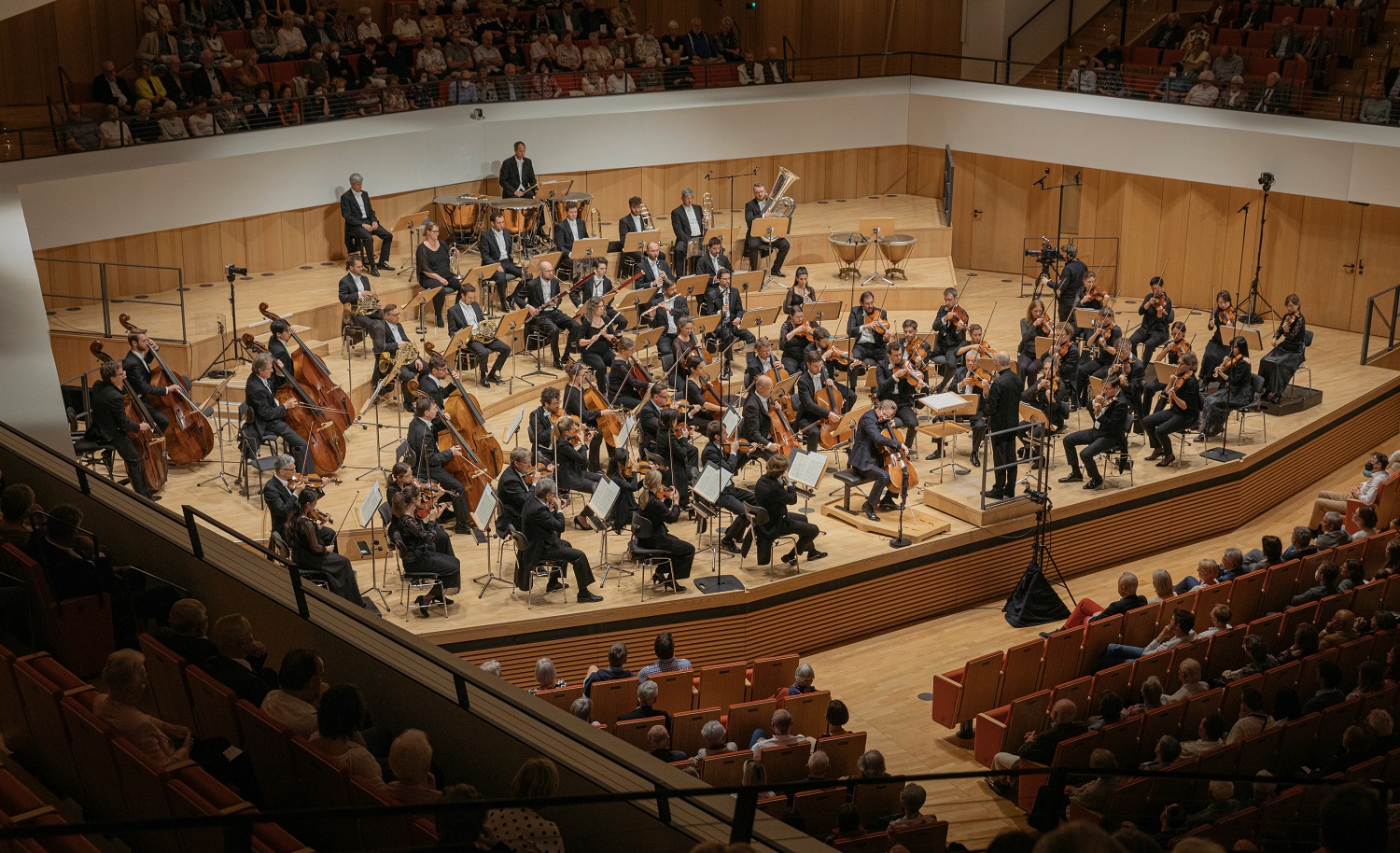 I suggest that this concerto requires a particularly close collaboration with the musicians of the orchestra, with many duos and small ensembles. “Yes, and I have a close friendship with them. I think the soloist shouldn’t just be in the foreground. There’s a lot of cello in Dvořák’s Cello Concerto, and you can still hear it. But there are also intimate moments. With the flute duo, I always listen to it. In rehearsal, I asked him to play more, because I’m only the second voice here. You get that energy from the other players, and you can really use it.

The performance took place in the communist-era Kulturpalast, a monstrously displaced Plattenbau from the GDR outside (with works of art listed, shown below), and an elegant and acoustically refined winemaker-style concert hall inside. Vogler’s tone and expression are focused and direct, with some warmth, but little of the richness and weight of East Germany. His interpretation of the Dvořák was discursive and poetic, with a lyrical flair, but without any fake gravity or excessive drama. The Frankfurt Orchestra sounded crisp and precise, and Vogler’s duets, with solo flute and violin, sounded like conversations between equals. 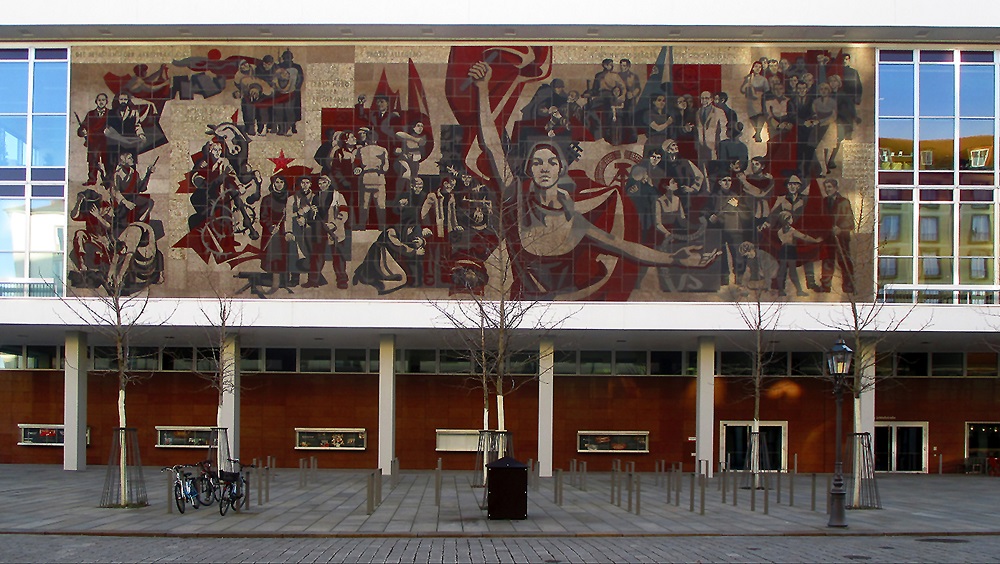 Järvi concluded with Beethoven’s Eighth Symphony. “The conductor’s interest in form and form” proved particularly valuable here. Beethoven follows the traditional symphonic structure, but his music always seems to go against the obligations of form. Järvi projected this tension beautifully, making meaningful interventions at points that would otherwise be structurally insignificant and often exceeding great climaxes and cadences. The endings of the first and second movements seemed almost accidental, unrelated to the composer’s thinking. The tempos were generally fast, but that was more than justified by the clarity of the texture. A few quivering ensemble moments from the woodwinds and brass betrayed the fact that this orchestra is not at the same level of excellence as those in Dresden, but the collective passion and uniformity of intent ensure an equally distinctive sound. .

The concert took place in front of a packed audience in the important Kulturpalast, and previous events were also well attended: a triumph for the Festival’s marketing team. Until shortly before opening night, government restrictions meant they were planning events with very small, socially distanced audiences. But a surprise announcement in late March reversed that decision, meaning 20,000 more tickets suddenly became available. And they sold out quickly, both to local audiences and to the many tourists who returned to the historic city. The message of this year’s festival is clear: live music in Dresden is back.