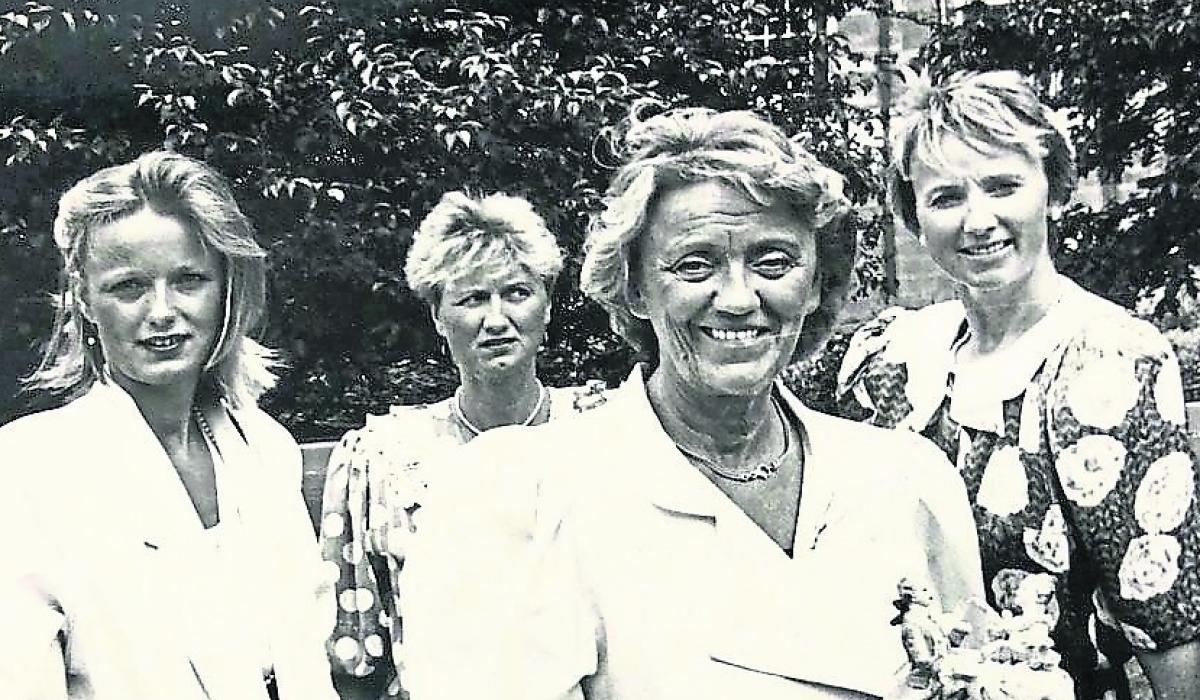 Yesterday and today: from Dresden to Dromcollogher

IRISH DRESDEN celebrates its 60th anniversary this year and a year after the death of its founder Johanna Saar, it’s time to remember how it all happened.

Johanna Saar was a remarkably kind and industrious German lady who enjoyed a long association with the town of Dromcollogher on Limerick’s border with Cork.

The Irish Dresden founder moved to Limerick with her family in 1962, and her drive and determination propelled the city onto the international map. At its peak, the company employed up to 70 highly skilled people handcrafting beautiful porcelain figurines and gift garments which they exported worldwide.

Johanna and her husband Oskar arrived in 1962 to establish their unique family business of hand-laced artisan porcelain which could trace its origins (founder Anton Muller) to the early 18th century and the German state of Thuringia.

Irish Dresden, formerly Müller Volkstedt, was founded in 1907 in Thuringia, in an area known as the green heart of Germany. Until the outbreak of the Second World War, the company which employed 100 people was flourishing and had gained a worldwide reputation as one of the best porcelain companies in Germany.

The factory was destroyed in 1945 by American forces during the war but the old master molds were intact in the cellars.

The factory was rebuilt and production continued in the city until the Russian occupation in 1950. This forced the family to escape and cross the border as refugees into West Germany . They set up a business in a small town on the edge of the Black Forest and continued to produce their wares for another decade, before labor shortages were the main reason for moving to Ireland.

How they came to Dromcollogher and settled in business is worth recounting.

The Dromcollogher Muintir na Tire guild was formed in the 1950s to stem emigration and attract industry to the famous border town of Cork. Dromcollogher was one of the starting points of the Irish co-operative movement, with the first co-operative creamery being established here in 1889 on the initiative of Horace Plunkett.

The listed building has since been restored and now houses the National Dairy Cooperative Museum.

The Guild’s first attempt was to examine the possibility of obtaining a new industry for the parish. He began by making a survey of the district within a radius of six miles from Dromcollogher.

The goal was to find out the amount of manpower available. He also gathered other relevant information that could attract a potential industrialist. All this information has been included in a brochure.

An advertisement was inserted in the most widely read German newspaper, Die Weld. This caused many inquiries and in response to each of these a copy of their brochure and a map of Ireland were sent. The result was disappointing, but help came from Diarmuid O’Riordan of Askeaton, who put them in touch with Herr Oskar Saar, a German industrialist who wanted to move his porcelain factory to Ireland.

It had become impossible for him to continue this old-fashioned business due to labor shortages in Germany, and he was willing to transfer all his mold designs (worth £12,000) to a Irish society.

His factory had been producing porcelain figurines of the well-known Dresden type for over seventy years. It was exactly the kind of industry the people of Dromcollogher were hoping for. A demanding craft that could develop in a rural environment, and a factory that did not require any of the amenities and natural assets that were not available there. They accepted Mr. Saar’s offer and set about establishing Porcelain Products Ltd to continue the tradition of the old German industry.

Starting a new business is expensive and labor intensive. Fortunately, they had the cooperation of the local community which subscribed a large amount of capital.

They received great help from the Industrial Development Authority, which enabled them to obtain the usual government grants. The County Limerick Vocational Education Committee later came to their aid by paying the salaries of two German technicians during the preliminary training period.

The immense amount of work done by John Galvin who was the secretary at the time deserved special mention also for the role he played.

The training period began in September 1962, in the former National School, which turned out to be unsuitable, and at the beginning of the following year, they moved to the parish hall. In the meantime, the construction of a new factory was started and they were able to be transferred there the following June. They selected 35 workers who had passed the training school, entered the small-scale production.

It took some time for workers to master the craft and gain the necessary experience to achieve the required quality. The skill took three years to learn and in Germany was tested.

In 1965, it became necessary to deal with the purchase of a larger furnace to cope with the increase in production and the construction of an extension to the factory for lack of storage space. Even with government subsidies, these operations were expensive, but they were made possible by an increase in production. The company has also experienced transportation problems with delays in imports of raw materials and exports of their goods.

The seafarers’ strike in Britain had a detrimental effect on the tourist trade, leading to a drop in their sales on the domestic market. The bank strike and credit crunch also made it difficult to collect money owed to them.

CIE has arranged for one of its coach tours to pass the factory once a week during the summer months. The 25-40 visitors every Wednesday afternoon for an hour were taken to visit the factory and then given a cup of tea.

It was a profitable business and the free publicity also helped spread their name. The company has sold thousands of books of its products to customers in Ireland, England, France, Germany, the Netherlands, Sweden, the United States, Canada and Australia.

After four years of hard work, the company has established itself in Dromcollogher, employing 35 young people to earn a living in their home town.

American visitors in particular have brought a lot of business to the factory over the years. They also held sales for special occasions that allowed the public to purchase unique items, and their gift shop was an added attraction.

The saddest part of the story is that Oskar died suddenly of a heart attack in 1968.

Johanna and her daughters continued the business. Sabina as production manager, Cornalia as marketing manager, Angelika as a gifted painter and Suzy who ran the White Gold gift shop in Limerick.

I will conclude the story in the next column.